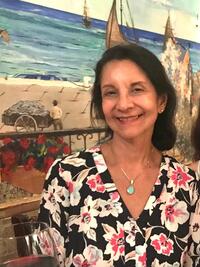 Sonia Valle, B.A. George Washington University, Ph.D. Tulane University, faculty member at Yale, 2002-2004 and again beginning in 2006: You are a distinguished teacher of the Spanish language, with scholarly interest and accomplishment in Caribbean and contemporary Latin American literature, Latin American women writers, and Latin American cinema – all of which have greatly enriched your language teaching.

Born in New York City, you are multi-schooled in various languages, as fluent in French as in Spanish and English, with degrees from Tulane as well as George Washington; the Université de la Sorbonne Nouvelle, Paris III; and the Simón Bolívar University. Quite a list! You have also taught in a variety of schools in a number of different countries: in Caracas at Francisco de Miranda College and La Universidad Simón Bolívar; at East Tennessee State and the University of Virginia College at Wise; at Tulane and the University of Southern Mississippi. Again, what a range!

All that experience in all these different places has enabled you to bring much knowledge to Yale, where you are well known as a superbly energetic teacher of Spanish. In the classroom a number of things have combined to make you a special teacher. The first is your interest and passion for theater, in particular Latin American theater, which has helped you to see teaching as a performing art. Your colleagues have great admiration for your energy, describing how you prepare yourself for class by walking at a rapid pace down the street to your classroom, where you arrive with an infectious burst of energy. As a pedagogue you use that dynamism to vitalize your classroom and to induce your students to practice with one another with natural engagement and without inhibition.

The range of your interests and knowledge all inform your teaching. You are a core part of a group of Yale people who initiated the Latin American Theater Series, a program that brings acclaimed Hispanic theatrical productions to the Yale campus and produces plays at Yale with students and faculty taking acting roles. Your passion for cinema means you are always at Latin American film festivals and discussions, again enabling an interest that can transfer itself to your teaching. Your roots in Venezuela have given you a deep understanding of Venezuelan politics that challenges students not only to think about language but to look at it in its interdisciplinary contexts. Just last semester you galvanized a unit on female modern contemporary poets and used your connections and outreach to invite one of the poets to class. Your thinking has never been static: you are always alive in seeking ways  to make your classroom an exciting and broadly educational place to be.

Your life at Yale has included time as the Spanish language program director – as everyone knows, a fiercely challenging job in a language that so many students take – and deep commitment to the Center for Language Study (CLS), where you have been actively involved in exploring pedagogical matters with your colleagues. As you retire from teaching at Yale -but never, we know, from those passions you have brought to the classroom – Yale thanks you for having brought life to the classroom – and the classroom to life.