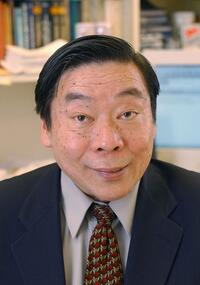 TP Ma, B.S. Taiwan University, Ph.D. Yale University, faculty member at Yale since 1977, was an award-winning electrical engineer whose work with semiconductors and microchips placed him on the cutting-edge of worldwide electronic and technologic research.

Born in China, he fled with his parents to Taiwan following the Chinese Civil War and received his undergraduate education there. He came to Yale for his graduate education, spent two years at IBM, and then returned to Yale, where he began researching semiconductors with his mentor, Professor Richard Barker, whose research spanned solid-state science and technology and who founded the Yale Center for Microelectronic Materials and Structures.

One of Ma’s pathbreaking discoveries began with a visit to his wife’s Yale molecular biology lab, where she was researching the effects of radiation on bacterial samples. Fascinated by the way radiation had affected the clear glass, turning it gray, he suddenly wondered what it would do to silicon-based semiconductors. This stroke of lightning led to his research on the effects of radiation on silicon chips and semiconductors, leading to historic findings that ultimately aided U.S. security and allowed longer lifespans for satellites.

Pa was called by one of his colleagues “the locomotive in driving the microelectronics research at yale.” His seminal work on transistor gate dielectrics revolutionized the microelectronics industry. He did this by engineering the dielectric gate materials, which control the flow of electrons through a transistor. His discoveries allowed the transistors to be made extremely small and thus allowed more transistors to be packed on an electronic chip, thereby increasing computing power.

For research and contributions to the field of gate dielectrics and to the development of the microchip, he received the 2005 Andrew S. Grove Award, only one of the many ways in which he was honored. He received as well the Connecticut Yankee Ingenuity Award, the B.F. Goodrich National Collegiate Inventor’s Advisor Award, the Pan Wen-Yuan Outstanding Research Award for researchers of Chinese descent who have made theoretical innovations, the Paul Rappaport Award of the IEEE Electronic Device Society, and the Connecticut Medal of Technology. He was a member of the National Academy of Engineering, the Chinese Academy of Science, and Taiwan’s Academia Sinica. In 2016, he received an honorary doctorate from the National Chiao Tung University in Taiwan.

Ma was twice chair of Electrical Engineering for significant periods and was co-director of the Yale Center for Microelectronic Materials and Structures. He was recognized by students, postdocs, and colleagues for his warmth, kindness, generosity, humor, welcoming smile and mentorship. “Life adviser, close friend, role model,” one student said.  “Full of wisdom, solid on his rationales, frank in his technical judgements, and yet fully open minded to all points of views,” said another. “People love him” a third summarized. He was such a distinguished researcher that few might have imagined his avocation: he was a fine ice skater. Anyone coming to Ingalls Rink during a lunch skate, or on a weekend when the Yale Figure Skating Club was practicing, might have seen him over the years skating around the rink, making as many intricate configurations on the ice as he did over the years in his Yale laboratory – configurations for which his university is deeply grateful.