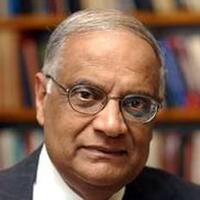 Bob Narendra, B.E. University of Madras, Ph.D. Harvard University, faculty member at Yale since 1965:  You are a control theorist of wide range and great distinction.

In control theory you have worked on issues that affect a broad spectrum of new technologies in such areas as robotics, manufacturing, space technology, and medical instrumentation as well as in older technologies such as helicopter control. You use mathematical modeling to consider stability, speed, accuracy, and robustness, which are the four desirable characteristics in any efficient control system. To explain your work at the very most basic level to non-engineers, one might ask them to imagine the systems that need to be effectively adapted to control the heat in their homes; or for pilots, how to control the tilt and speed of helicopter rotors. As this research developed, you turned your attention to the systems of many other technological devices. In 1981 you founded the Center for Systems Science, of which you have ever since been the director. Your work there has greatly extended your research into artificial neural networks, and into considering how such networks can be used to identify and control unpredictable nonlinear dynamical systems.

As consistent and pathbreaking as your research has been, it has not been the only way in which you have engaged and contributed to Yale in your fifty-five years on this faculty. You are, as a person, an outgoing polymath, full of intellectual interests, energy, and charm. You like nothing more than a deep discussion with someone who is capable of matching your intellectual firepower over good food and wine – you are a notable oenophile. You have taught scores of graduate students whose careers have benefited from your mentorship and who look up to you and have great affection for you. A friend describes two of your former research students who appeared one day in New Haven to visit you in your office. You asked what they might be doing at Yale. They looked at each other, astonished, and said: “We came to visit you.” You hadn’t imagined the debt they felt, or the depth of respect and admiration they, and so many others, feel for you. And it hasn’t been only graduate students or postdocs. You also have spent time engaged with undergraduates in Timothy Dwight, where you have long been a fellow, and have made significant contributions to the TD student and fellow family.

You and your wife Barbara, a long-term employee of the Peabody Museum, who devoted herself  to the preservation of the Peabody’s historically important collection of meteorites and to the Peabody archives, have fully enmeshed yourselves in the Yale community. In 2021 you together made an endowment to support the Peabody’s Mineral and Meteorite Collections, some of the many treasures of the museum. For fifty-five years, Bob Narendra, Yale has been the center of your life, and you have brought to it not only your intellectual achievements but your heart and soul. The university is proud to honor a brilliant and committed scientist who has brought so much of such value to his American home.