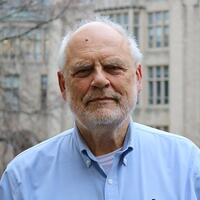 Professor of Electrical Engineering and of Ecology and Evolutionary Biology

Rimas Vaisnys, B.S. Yale University, Ph.D. University of California at Berkeley, faculty member at Yale since 1959: Many have called you a polymath and if an outside observer looks at the course of your career, and the number of research interests you have had, that word would seem apt.

Your personal history tells the tale: you entered Yale at fifteen, graduated at nineteen, and received your Ph.D. in chemistry from Berkeley at age twenty-three—and by the time it was awarded, you were already back teaching at Yale. Here you have been a member of four departments: Chemistry, Geology, Electrical Engineering—and in later years you have added to those Ecology and Evolutionary Biology, in which you are an affiliated member. In addition, though it is unstated, Applied Mathematics could claim you, as mathematics is at the core of much of what you do. The congregation of these departments shows well that your abilities and interests are cross-disciplinary and cross-departmental. You are not, and never have been, an easy man to “categorize.”

Your own research over time has centered on ecological and evolutionary processes, on the behavior of dynamical systems, and on the physics of computation. Your specific systems of study have ranged from phage to hominids. You are interested in the behavior of real systems and in using observational and theoretical techniques most appropriate to a given situation. For this you have applied techniques drawn from probability theory and statistics, discrete and computational mathematics, linear algebra, and differential equations. At the moment you are involved in a program of observation and modeling of the behavior of humans in small groups with a professor in Lithuania. Your expertise at mathematical modeling and theoretical and observational techniques is at the foundation of your interest in using all these areas to apply to real-world problems.

This same ability to understand and know a wide range of things has made you someone others come to for help. When other researchers are stymied or in need of a particular kind of aid, suddenly the thought of “Rimas” comes to their minds. That same ability to be helpful in a wide range of areas has stood you in special good stead as a teacher. When a member of the class of 1963 at his fiftieth reunion nominated you for a best Yale teacher award for his generation, he mentioned not chemistry, biology, engineering, or ecology but a book on physics, to which you introduced him, opening a pathway for his own future teaching. And in the early days of the Jonathan Edwards College Mellon Forum, when students presented their senior essays on a wide variety of topics, you were well known as someone who could be counted on to have the intellectual breadth and rigor to counter, challenge, inform, enlighten, and support them.

Many faculty are deeply invested in their own disciplines. You are one who has shown that certain kinds of deep thinkers cannot be contained by neat categories. As you retire, not one, but four departments thank you for your work over more than fifty years.