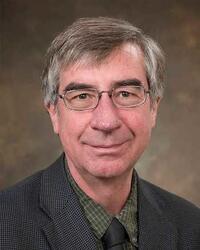 Charlie Schmuttenmaer, B.S. University of Illinois at Urbana-Champaign, Ph.D. University of California at Berkeley, faculty member at Yale since 1994, was a pioneer in the development and applications of terahertz (THz) spectroscopy, finding novel applications for this research, which, among other applications, increases the efficiency of solar energy.

Charlie came upon his research interests, as many scientists do, by hearing something in a conference that he could use to galvanize his own research. During the proceedings he was introduced to the possibility of generating short pulses of far-infrared radiation using the same ultrafast laser systems that he was using. Armed with a new way to explore the THz frequency region using ultrafast methods, Charlie set his course to “mine the gap” – the THz portion of the electromagnetic spectrum that previously had proven difficult to investigate.

Schmuttenmaer and his lab group used THz spectroscopy to study a variety of systems. He most recently exploited the unique features of time-resolved THz spectroscopy to characterize the efficiency of electron injection in dye-sensitized photoelectrochemical cells, as well as transient photoconductivity in semiconductors, quantum dots, nanoparticles, and nanotubes. A second major research area involved THz-time-domain spectroscopy coupled with high-level ab initio quantum chemical calculations to probe and understand the low-frequency collective vibrational modes in organic molecular crystals. A primary goal is to experimentally measure and theoretically compute the optical activity of these low-frequency modes.

Charlie was also a founding member of the Yale Solar Group, a fifteen-year fruitful collaborative effort with his Yale colleagues Gary Brudvig, Bob Crabtree, and Victor Batista to develop and understand the fundamental science behind photocatalytic platforms for the conversion of solar energy to transportable fuels.

Charlie’s research gives a sense of his scientific accomplishments, but not of who he was as a person or his influence. The tributes that poured in at his death give a better measure of the man. Those who knew him as a scientist, including those in his lab group, speak of his curiosity, openness, energy, enthusiasm, outgoing nature, humility, zest for life, and care for others. Students in his research group praised his out-of-the-box thinking, encouragement to pursue their own ideas and projects, and the camaraderie of the group. Gary Brudvig praised his ability to make the group “think hard about science” and to liven meetings with videos, such as “How to Make a Solar Cell from Donuts and Tea” and “Who Killed the Electric Car?” Everyone from the International Society of Infrared, Millimeter, and Terahertz Waves to colleagues at Brookhaven National Lab mentioned his dedication to his work, buoyant personality, optimism, contagious enthusiasm, kind ways, and gentle heart.

In some people accomplishment seems to come through brainpower separate from personality. In Charlie Schmuttenmaer, the combination of his brain power and personality were the elements that led to his success as a scientist, teacher, and mentor, and his legacy as a warm and special human being who will be missed equally for his heart as well as his brain.