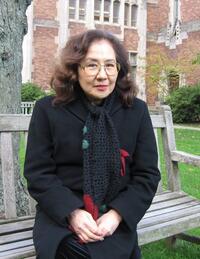 Kang-I Chang, B.A. Tunghai University, Taiwan, Ph.D. Princeton University, faculty member at Yale since 1982:  You are a scholar of classical Chinese literature with a special expertise in poetry and broad interests in comparative studies of poetry, literary criticism, gender studies, and cultural theory and aesthetics. A prolific author and editor, you have published eight books in English and thirty books in Chinese, alongside almost a hundred scholarly articles. Your earliest books in English, The Evolution of Chinese Tzu Poetry, Six Dynasties Poetry, and The Late-Ming Poet Ch’en Tzu-lung, established you as one of the foremost scholars of traditional Chinese literature not only in North America, but also in the world. But though these early works put you on the map, they were only the beginning.

Beyond your single-authored scholarly monographs and your prodigious output in Chinese, you have also edited important contributions to your field. With Ellen Widmer you co-edited Writing Women in Late Imperial China, making neglected Ming and Qing women’s poetry accessible to the world; with Haun Saussy, Women Writers of Traditional China, bringing together representative selections from the work of some 130 poets from the Han dynasty to the early twentieth century; and with Stephen Owen, the field-defining Cambridge History of Chinese Literature, an account of three thousand years of Chinese literature, accessible to non-specialist readers as well as scholars and students — all of these opening a world of Chinese literature to those who otherwise might not be able to access it.

It is important to mention in lauding you how challenging has been the personal history you have overcome. As your book Journey Through the White Terror: A Daughter’s Memoir describes it, during hard times in Beijing your father took the family to Taiwan, where after four years he was arrested by the Nationalists during the White Terror and imprisoned for ten years. He was imprisoned when you were six, and you did not see him again until you were sixteen. At the same time, your grandfather, who had remained in China, was persecuted by the Communists for his Taiwanese connection, and committed suicide. You persevered through all this trauma, eventually coming to the United States, where, through a long, winding road, you acquired an M.A. in English literature, an M.L.S. in Library Science, and eventually a Ph.D. in one of the most prestigious programs in the country.

During your long tenure at Yale you also have made significant administrative contributions to your department as chair and DGS; and for your contributions as a teacher, you were presented with the DeVane Medal for scholarship and teaching, awarded by the Yale Chapter of Phi Beta Kappa – one of the most prized awards for teaching a Yale faculty member can receive.

For your contributions to literature and scholarship in Chinese and in English, your devotion to Yale as a scholar and teacher, and for our appreciation of how a young girl, who endured much, has triumphed as a scholar and teacher and become a key member of Yale community, your colleagues and friends at Yale offer you a heartfelt Xie Xie Nin!