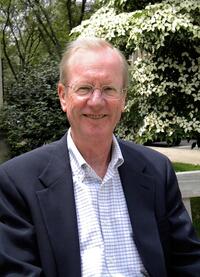 Jonathan Edwards Professor of Religious Studies and Professor of American Studies, of Divinity and of History

Skip Stout, B.A. Calvin College, graduate work at Princeton Theological Seminary, Ph.D. Kent State University, faculty member at Yale since 1986 after a decade at the University of Connecticut: You are a historian of religion and a campus leader. Moving between the Department of Religious Studies and Yale Divinity School, you instructed generations of students about evangelicalism, war, and the American idea.

Among your seminal works is The New England Soul: Preaching and Religious Culture in Colonial New England, a book one reviewer called “breathtaking in scope,” which explores preaching through the analysis of 2,000 sermons spanning the colonial period. You followed this success with the publication of The Divine Dramatist: George Whitefield and the Rise of Modern Evangelicalism, a biography of an eighteenth-century celebrity preacher who commanded mass audiences across two continents through his personal charisma and popularization of Calvinism. With these two books you established yourself as the leading historian of evangelicalism in early America. You also launched a field-defining career as an editor and collaborator, spearheading the effort to co-edit what would ultimately be a twenty-seven-volume collection of The Works of Jonathan Edwards, as well as an edited collection on religion in the Civil War, and a reader on religion in American history. Your collaborative relationship with Yale’s Jon Butler included supporting many graduate students and scholars who received funds for their research through your Pew-funded grant on religion’s impact in U.S. society.

While writing, teaching, and editing, you were, although a scholar of Jonathan Edwards, for eleven years the Master of Berkeley College. You became intimately involved in student life, managing all the functions of the college, hosting guests, fellows, and students at teas, serving on the Council of Masters, the Faculty Committee on Athletics, and becoming powerfully involved in Yale’s educational and residential college life. The parties you threw at Berkeley are well remembered for their conviviality and their dancing.

Throughout your time as a college leader and then chair of Religious Studies, your scholarly life never abated. In 2006, you waded into powerful argumentative waters, authoring Upon the Altar of the Nation: A Moral History of the American Civil War. This watershed book considers the Civil War a “war of ideas,” in which both the Union and the Confederacy understood themselves to be fighting a moral war with God on their side. The publication of this book strengthened your investment in your popular Yale College course, “Religion, War, and the Meaning of America.” Meanwhile, you launched a new multigenerational study of a nineteenth-century family, the Andersons of Kentucky. Based on extensive archival research, American Aristocrats: A Family, a Fortune, and the Making of American Capitalism showed how land surveying and speculation intersected with religion on the risky capitalist terrain of the U.S. frontier.

You have been an advocate for junior scholars, and a friend to many. You never hesitated to make a tough call or stand up when you saw a failure of ethics by a colleague or, in your work on the Investments Committee, Yale itself. For thirty years you brought to Yale a commitment to historical thinking, a respect for the political and intellectual power of religion, and an ability to find the humor in hard moments. We thank you, and hope you find in Stony Creek the joys of further study and the pleasures of “the sight of the deep-blue sky and the clustering stars,” that, according to Jonathan Edwards, “impart a quiet to the mind.”