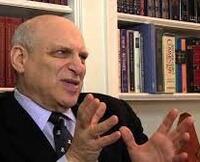 Professor of Slavic Languages and Literatures

Harvey Goldblatt, B.A. McGill University, Ph.D. Yale University, faculty member at Yale from 1977-1984 and again since 1990: You are one of the foremost scholars and teachers of medieval and premodern Slavic literature of your generation.

You have written on an extraordinary range of topics in Slavic culture, from the history of the Slavic literary languages to the literary patrimony of the Orthodox Slavic community; from medieval Bulgarian and Serbian and premodern Ukrainian literature to the comparative study of epic traditions in Western and Eastern Europe; and from Slavic philology to the relationship of Western humanism and the cultures of the Orthodox Slavic world.

As a medievalist, your work has transformed our view of the entire Cyrillo-Methodian literary tradition; of the Lay of Igor’s Campaign, the most celebrated epic work of the East Slavic world; and of the intellectual contributions of such crucial figures as the Ukrainian monk and cultural activist Saint Ivan Vyšens´kyj and of the medieval Bulgarian scholar and chronicler Constantine Kostenecki. Two rich volumes of your essays on the medieval and premodern literary civilization of Russia and Ukraine were published in Poland in 2019, and another collection will appear soon in Russian: ample testimony, in addition to your many articles in Italian publications, to your world eminence in the field of Slavic studies.

A devoted teacher, who mixes scholarly gravitas with your inimitable wit and humor, you have introduced generations of students to the bounty of medieval and premodern Slavic literary and language study, the vital traditions of textual criticism and philology, and even to the ways that the old Slavic traditions are continued and transformed in nineteenth-century opera and twentieth-century film. Many are the testimonies of those you have guided through Old Church Slavonic (OCS), making this feared and difficult challenge not only a wonderful learning experience but a pleasure.

You also have assumed important Yale administrative roles – as a proud Canadian chairing the Canadian Studies Program for a decade, the Committee on Language Study and the Ukrainian Initiative for half a decade, and taking your place on the Executive Committee of European Studies for two decades.

Perhaps most memorably among your memorable accomplishments, you were for an extraordinary nineteen years the beloved Master of Pierson College. In that role your energetic and embracing nature, your deep sense of community, and your sprezzatura (to recognize your love of all things Italian) led you to develop your own vision of the way in which the residential colleges could amplify the educational role of the university in helping students grow and develop. You did all the things that Heads of College do, including overseeing administrative matters, and fostering the social, cultural, and educational life of the college. And then you did more, acting as paterfamilias, creating a haimish environment, making a home away from home for your students, welcoming alumni into their “forever” community, and becoming the recognized heartbeat of the college. Generations of Piersonites gratefully recognize and laud you as a key figure in their Yale experience and as a representative of the best of Yale.

You began your doctoral studies at Yale in 1970 as the devoted student and later frequent scholarly collaborator of the eminent Italian Slavist Riccardo Picchio. As you retire to continue translating and preparing his essays for publication, and to carry on infusing the world with your special “Harvey” energy and buoyant personality, your Yale colleagues salute you with a double “Za zda-ró-vye: and Cin Cin.