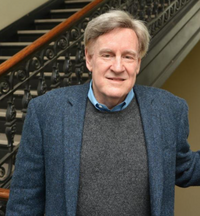 You are an outstanding scholar of Latin America whose research has made you an internationally respected expert on the history of modern Latin America, particularly Mexico and Central America, on revolutionary and social movements, and on U.S.-Latin American relations, especially during and after the Cold War.

It would be impossible to list in this short space all of your scholarly contributions: your six books; your numerous articles, two of which earned you the Sturgis Leavitt Award for the best article on a Latin American subject; your many lovingly edited volumes of essays. Perhaps we can at least name, as standing out, your early book, Revolution from Without: Yucatán, Mexico, and the United States, 1880–1924, and your later volume with Jürgen Buchenau, Mexico’s Once and Future Revolution: Social Upheaval and the Challenge of Rule since the Late Nineteenth Century, named a History Book Club selection. There are also the thirteen pathbreaking volumes of essays you edited or co-edited after your organization of a series of conferences on Latin America in the era of the Cold War. Books like Everyday Forms of State Formation  and Reclaiming the Political in Latin American History became important markers in the development of a period when that region seemed suspended between hope and desperation as it became an ideological battleground of the contending superpowers.

Your career has been a shining example of the union of the highest levels of scholarship, administration, mentoring, and teaching. You have been the president of the Latin American Studies Association, the world’s largest association for individuals and institutions engaged in the study of Latin American studies; an adviser on the PBS series on the Mexican Revolution; and the North American Chair of the Joint Organizing Committee of the Conference of Mexican, U.S., and Canadian Historians. Within the university you were head of Yale’s Council of Latin American and Iberian Studies from 1994 to 2005 and greatly expanded its impact on campus, sponsoring a series of symposia and conferences, maintaining a Title VI area studies program, and, with your colleague Stuart B. Schwartz, winning a Mellon Foundation endowment for Graduate Study in Latin American History and for a decade jointly editing the Hispanic American Historical Review, the leading journal of history in that field.

Your doctoral writing workshop seminars became a staging area for generations of students, including your forty-six Ph.D. students, to launch their careers. For the excellence of your mentorship you were awarded Yale’s inaugural Graduate Mentor Award in the Humanities, and for your undergraduate teaching the Harwood F. Byrnes/Richard B. Sewall Prize for Teaching Excellence in Yale College. What more could a  university ask?

It would not be right to end this tribute without a mention of your late wife, the anthropologist Patricia Pessar, a noted Latin Americanist in her own right, who joined the Yale faculty at the same time as you. You taught courses together, and she became one of the principal founders of Yale’s program in Ethnicity, Race, and Migration. Her legacy lives on in what she accomplished, and what you accomplished together. As you retire, the university where you took your graduate degree proudly salutes you for the breadth of your contributions to both scholarship and community.