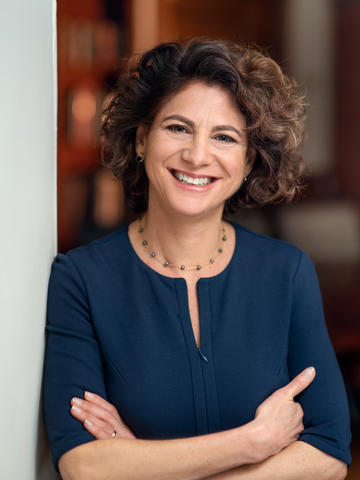 Tamar Szabó Gendler is Yale’s Dean of the Faculty of Arts and Sciences, the Vincent J. Scully Professor of Philosophy, and Professor of Psychology and Cognitive Science. She holds a BA summa cum laude with Distinction in Humanities and in Mathematics-&-Philosophy from Yale University (1987) and a PhD in Philosophy from Harvard University (1996). After teaching at Syracuse and Cornell Universities for nearly a decade, she returned to Yale in 2006 as Professor of Philosophy and Chair of the Cognitive Science Program. In 2009-10, supported by the Mellon Foundation’s New Directions program, she spent a year as a full-time student at Yale doing coursework in psychology, neuroscience, and statistics. In 2010, she was appointed Chair of the Yale philosophy department, becoming the first woman chair in the department’s two-century history and the first woman graduate of Yale College to serve as the chair of a Yale department. In 2013, she was appointed Deputy Provost for Humanities and Initiatives, a position she held until she assumed her current role in 2014. As FAS Dean, Gendler has focused on building excellence and collaboration within and across traditional disciplinary boundaries throughout the divisions in the Faculty of Arts and Sciences and across the university more broadly.

Gendler’s academic research brings together the techniques of traditional Anglo-American philosophy with empirical work from psychology and other social sciences; her interests include the relation between imagination and belief, the contrast between rational and non-rational persuasion, and the role of habits in shaping behavior and judgment. Many of these issues are explored in her Open Yale course, Philosophy and the Science of Human Nature. She also has interests in education policy and practice, and worked for several years after she graduated from Yale as an education policy analyst at the RAND Corporation.