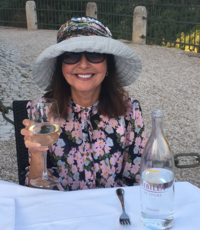 Dunham Professor of Classics and of History of Art

You are an art historian known worldwide for your expertise on the art and architecture of the ancient Romans. You are the author of numerous books on Roman art in its political and social context including Roman Sculpture, the fundamental reference on the subject. You have done foundational work on Roman women, centered on the ground-breaking exhibition “I Clavdia: Women in Ancient Rome,” and are the author of Cleopatra and Rome, which opens a new perspective on one of the most intriguing women who ever lived. Your expertise in the area—including your visual guide to Roman architecture, your books on Roman funerary reliefs, your e-book Roman Architecture: A Visual Guide, and your dozens of essays, exhibition catalogues, chapters, articles, and reviews—make you one of the leading experts in your field.

But beyond your valued research, you have made other significant contributions to Yale and to the wider world. As the deputy provost for the arts in the Office of the Provost from 1995 to 2003, you nurtured and cared for all of the arts at Yale. But perhaps most importantly of all, as the founding director of Open Yale Courses, and a primary contributor to distance learning and media initiatives for a decade and a half, you pioneered Yale’s digital faculty presence and enabled dozens of Yale’s influential faculty to offer their courses online, and thousands of students and others to appreciate and learn from them.

Your own much appreciated course on Roman architecture led the way. You have explained that students at Yale often took the course on planning to go to Rome, and they (and their parents) would write you afterward to say how their knowledge of Roman architecture enabled them to experience the city at a deeper level. Through Yale Open Courses and Coursera, this same course reached worldwide audiences, enabling them as well to deeper appreciation and more informed travel – as did your AllLearn courses on Pompeii and on women in ancient Rome.

You have said that your own teacher at Smith, William McDonald, wrote, “In the study of architecture, there can be no substitute for leaning against one’s buildings.” These words, you have said, resonated with you and have been critical to what you have learned from being on site at so much of what you have written about. For leaning against many Roman buildings, Diana Kleiner, and many Yale buildings as well, and for sharing what you have learned with others, the faculty of Yale offers you a fond “Vale.”