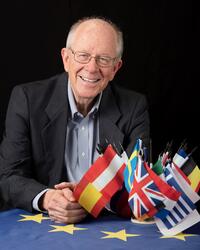 David Cameron, B.A. Williams College, Ph.D. University of Michigan, faculty member at Yale since 1975: You have helped shape modern scholarship about the role of the state in advanced capitalist societies, and you have been a citizen of great distinction at Yale and in your city and state.

Early in your career you wrote an article in the American Political Science Review that was recognized in the 100th volume of the discipline’s flagship journal as one of the top ten most cited articles in the post-war period. In that pathbreaking piece you argued that trade openness was the most important source of the dramatic expansion of the public economy between 1960 and 1975. The article established a new empirical foundation for the compensation hypothesis that social policy could generate political support for wage restraint and other policies necessary to ensure competitiveness in open economies. This insight proved foundational not only to explaining the expansion of the public economy but also to understanding the political foundations of trade liberalization in the twentieth century. It is an insight that continues to demand the attention of scholars and policymakers.

In what you have written since then, in Post-Soviet Affairs and elsewhere, you have continued to think and write about the impact of trade openness on government, and – with respect to the European Union – about the negotiation of the Treaty on European Union, Economic and Monetary Union, the eurozone crisis, the creation of democratic polities and market-oriented economies in central and eastern Europe, the crisis in Ukraine, and, most recently, Brexit.

Beyond your research and writing, you have been distinguished by your service to Yale. For two decades, you have led the Yale Program in European Union Studies at the MacMillan Center. Your stewardship of this program, along with your teaching, has introduced hundreds of Yale students to this unique and remarkable experiment in global governance. You have supported and led the Yale European Studies Council, creating a vibrant intellectual community for faculty and students interested in all dimensions of European society, culture, and politics. In addition, you have been an outstanding citizen and leader in the Department of Political Science, serving as chair, and multiple terms as director of undergraduate studies and director of graduate studies. Undergraduates have valued your wise mentorship and graduate students have valued your diligent reading, sage advice, and encouraging energy.

Your dedication to community reached well beyond Yale, in ways unusual for any faculty member since the nineteenth century, when Yale faculty more routinely took part in city and state affairs. You served New Haven through your work on numerous panels, boards, and commissions charged with improving budgeting and policing in the city. You advised the state of Connecticut over a decade on the science of eyewitness identification and how this research should inform state law and criminal justice procedures. You also shared your expertise through innumerable opinion pieces in newspapers from the New Haven Register to the Financial Times.

As you retire, your colleagues celebrate your scholarship and toast your exemplary public spirit – which will be difficult to match or replace.