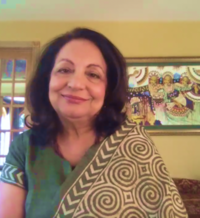 You were Yale’s first Senior Lector in Hindi, teaching the language and literature with enthusiasm and success at all levels. Your path to this position has not been a straight one. When you were in India, you took Hindi lessons up to high school, as all Indian students do, but you had no formal educational background in the language. In fact, your first M.A. was in English literature and you did not study for your M.A. degree in Hindi until you had taught in this country for some time  –  although it was clear from the start, as a born writer, that you had a passion for the literature of both languages. Once you did start teaching Hindi at Vassar College and simultaneously at NYU in 1995, you became a dedicated teacher and you never looked back.

At Yale you have been not simply a classroom teacher but a whirling font of energy and inspiration, working with imagination to stimulate interest and learning. On the Center for Language Study website you have collected materials to give dimension to students’ Hindi instruction, with soundtracks of movies; video clips from various newscasts and television shows; electronic flashcards for the alphabet; and a picture dictionary. Your “Hindi in Diaspora” project is a collection of written works and audio/video clips – from news broadcasts, interviews, soap operas, readings, and Hindi cinema – that serve as a growing database for understanding issues of assimilation and identity. You have worked assiduously on a “Partition Narrative” project to create an oral history of the Partition by conducting and recording interviews. You contribute to “Sandeshi” – the Hindi Stories-on-Tape series – by reading, recording, and assisting in development and distribution.

Your enthusiasm for the language and care for the students is reflected by the long queues of students who sought you out outside the classroom or joined you at the Hindi language table for lunch. You were not only their teacher, but also a mentor and a concerned friend, who gave them access to a new language through which they could express themselves and describe and reimagine the world around them.

One of your great accomplishments at Yale, beyond your teaching and mentoring, has been helping to establish and to foster the Hindi Debate Society. Born as a student idea in 2008, and nurtured by you, Yale Hindi Debate – in which students debate a predetermined motion, competing in many categories - now sees the engagement of students and faculty from Harvard, Princeton, Columbia, and many other colleges and universities. The event acts as an academic, social, and cultural event, immersing students in competing and honing their skills, and bringing them together as a community.

In 2000 you produced the first Hindi book on audiotape in the United States, and you have always said you would like to have the time to do more of this – as well as to work on your Hindi short stories and poems, many of which have been published in Hindi-language magazines and anthologies. Now you will have more time. You have also said that your greatest joy was in your Yale students, whom you have found intelligent, eager, and enthusiastic. They, and your colleagues, feel all of us at Yale have been lucky in you, and that the complicated route you took to becoming a distinguished Hindi teacher has brought many others knowledge, inspiration, understanding, and joy.