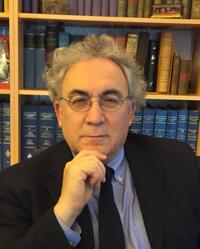 Abbas Amanat, B.A. Tehran University, D.Phil. University of Oxford, faculty member at Yale since 1983:  For years you were the sole historian of Iran, the Muslim world, the Middle East, and the Persianate world at Yale, the only one whose work focused on that important part of the map and brought its history, politics, and culture to the university. In a department that held Ahlstrom, Banac, Blum, Morgan, Spence, Winks, and many more when you began as an assistant professor, your work alone concentrated on that history, so critical to the history of the world and to modern politics. You have professed that field with an erudition, passion, and commitment born of love, keeping the eye of the university and a national and international research community on subjects too long neglected.

Among your scores of publications we highlight two seminal volumes: Iran: A Modern History, your expansive work on the political, social, and cultural history of Iran beginning in the seventeenth century and extending to modern times that took two decades to complete, selected among the five best books of history by History Today in 2018 and now being translated into Chinese, Persian, Turkish, and Arabic. Among equally successful major works is your Pivot of the Universe: Nasir al-Din Shah Qajar and the Iranian Monarchy, now in its seventh edition. These, and scores of other books, articles, editions, encyclopedia entries, and reviews, have made a major contribution to the understanding of the people and events that have shaped Iran, with its influence on cultures as far-flung as Greece, Italy, Russia, the Arabian Peninsula, and Asia, and with its present geopolitical strategic location.

Along the way you have taught and mentored scores of undergraduates hungry for further understanding, familiarizing them with the history, politics, and culture of an important part of the world through courses such as The Making of Modern Iran and Political Islam: The Origins and in Later Times. Your many graduate students are now leaders in the field in other institutions, bringing their own knowledge and understanding to a study in which you helped nurture and guide them.  As time went on and Yale widened its international focus,  you became the director of Iranian studies at the Macmillan Center, chair of its Council of Middle East Studies, and director of the Yale Internet History Archive on Iranian Studies. And you did not neglect your citizenship, taking your turn as DUS and on the Yale College Executive Committee and the Committee on Teaching and Learning, all of which familiarized you with a part of the undergraduate world you otherwise might not have known.

With your wife Maryam, who has taught French to scores of undergraduates, you have become a core part of the Yale family. For bringing the history of Iran and the modern Middle East to Yale, and giving Yale a presence in the studies in this area for a generation, your colleagues thank, honor, and applaud you.