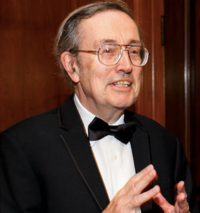 Bob Crabtree, B.A. New College Oxford, D.Phil. Sussex University, faculty member at Yale since 1977 after four years as a researcher in France:  No one knew – when your childhood chemistry experiments resulted in an explosion that almost ruined your family’s garden shed ­– that you would become a distinguished chemist, a member of the National Academy, and a Fellow of the Royal Society. But one thing was clear:  you were a young man with ideas – as some have called you, an “idea machine” – and this has never changed. Your career has been defined by your creative contributions to areas of high importance and your ability to seamlessly change the focus of your research on a regular basis.

When you started, organometallic chemistry, the study of molecules that include bonds between metal atoms and carbon atoms, was in its infancy, but thanks in no small part to your work, it has blossomed into a major scientific enterprise. The fact that your textbook, The Organometallic Chemistry of the Transition Metals, is now in its seventh edition is testimony to your preeminence in your field.

Among your many research accomplishments, you designed and synthesized the compound that chemists call “Crabtree’s Catalyst,” which is used to facilitate hydrogenation reactions in both laboratory and industrial settings. In addition, in collaboration with your Yale colleague Gary Brudvig, you produced a series of organometallic complexes that are relevant to the development of a system capable of artificial photosynthesis, a process that might someday enable society to end its dependence on fossil fuels. Throughout your career, your ability to collaborate with a variety of researchers from different backgrounds both at Yale and at other institutions has allowed you to make contributions to many fields of chemistry.

Because you write quickly and well, you have been prolific in writing review articles and have published more than fifty in your career, many of which have been important in defining both your and others’ research directions. And you are a fine mentor: Your scores of undergraduates, graduate students, and postdocs have benefited from your empathy and ability to inspire with your infectious energy and enthusiasm. This is why, in 2013, you were awarded the Yale Postdoctoral Mentoring Prize.

You are a distinguished chemist but you have other gifts. You have had a major role in building the Inorganic Chemistry division at Yale into a leading department in the world. You are a great storyteller with dramatic flare, a gift you may have received from your father, a film director of some renown, or your French mother, a singer and dancer. You have regaled students and colleagues with descriptions of your experiences visiting the Korean Demilitarized Zone while giving seminars in Korea or feeding pirañas while on holiday in South America, just to name two. And who would ever believe that in response to being required to choose an athletic activity in high school, you chose shooting, because it required the least physical activity, and then ended by captaining the Oxford shooting team and becoming the British National Champion for over 1,200 yards!

We know retirement for you will only mean continued collaborations with colleagues, continued imaginative ideas, and continued excitement with chemistry, although now your own garden shed is unlikely to be at risk. As you formally step down from the active Yale faculty, your colleagues thank you for shooting and hitting the mark in all ways: in research, fellowship, and life.