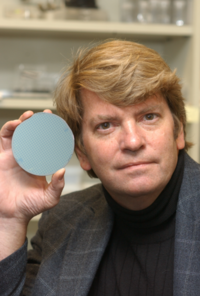 Mark Reed B.S. and Ph.D. Syracuse University, faculty member at Yale beginning in 1990, was an engineer and physicist, internationally recognized for his pioneering innovations in quantum physics and nanotechnology.

Reed started his career at Texas Instruments, showing his imagination and inventiveness when he coined the term “quantum dots”—nanocrystals sometimes termed miracle molecules—now widely exploited in semiconductor lasers, telecommunication devices, biomedical imaging, and drug delivery. – and demonstrated the first quantum dot device. During his thirty years at Yale, along with his lab colleagues, he continued this streak of “firsts,” enabling the first conductance measurement of a single molecule, the first single molecule transistor, and the development of CMOS nanowire biosensors. He was the author of more than 200 publications and six books and held thirty-three U.S. and foreign patents on quantum effect, heterojunction, and molecular devices. He also served as editor in chief of the journals Nanotechnology and Nano Futures, in addition to numerous other editorial and advisory board positions.

For his continuous novel research discoveries, Reed received numerous distinctions, including Fortune Magazine’s “Most Promising Young Scientist,” the Kilby Young Innovator Award, the Fujitsu ISCS Quantum Device Award, and the IEEE Pioneer Award in Nanotechnology. He was named a Fellow of the IEEE, the Canadian Institute for Advanced Research, and the American Physical Society.

Reed was the classic out-of-the-box thinker, an adventurous spirit, someone with enthusiastic interests that started in childhood and extended well beyond his engineering discoveries, but were somehow of a piece with them in modeling the way he approached life – energetically embracing it. As a young man he played football, the piano, the flute, and sang in a student band. In later year he was a gourmet cook, chess enthusiast, golfer, poker player (with Yale colleagues), and divemaster, who did deep dives and even explored shipwrecks. All of this was an outgrowth of his spirited, enthusiastic, infectious personality, which those around him found contagious.

Reed died suddenly, and too young, but his zest for innovation, like his zest for life, left his colleagues, students, and friends inspired and buoyed by the memory of his innovations, his devotion to engineering and education, and to the spirit of adventure that was a deep part of his work and life.