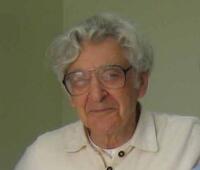 Professor of Molecular Biophysics and Biochemistry

Alan Garen, B.S. and Ph.D. University of Colorado, faculty member at Yale since 1963: You are a leading geneticist with a long and historic career addressing the “big problems” of biology.

You worked early on one of the unsolved problems involving the genetic code, answering the question of how the translation of messenger RNA into proteins knows when to stop. You and your colleagues demonstrated that certain triplet codons serve as periods in the genetic code, specifying where protein translation should terminate. You also discovered ways to suppress the ”stop,” thereby allowing translation to continue.

You then became interested in how higher organisms developed and decided to study the insect Drosophila melanogaster as a model system to explore key elements in the development of the fly. You identified the imaginal disc as an important feature in this process. You also showed that steroids are important in regulating cell differentiation, and in addition characterized many Drosophila mutants in terms of their function.

More recently you moved up the evolutionary tree and tackled even more complex problems - one of them involving retroviruses and their influence on tumor development in mice and humans. Your discovery of a particular long non-coding RNA from one of these retroviruses showed that it was involved in promoting tumor formation. You also identified tumor suppressor proteins and the genes that code for them, which are important not only for suppressing tumor formation but also in the early development of many mammalian species, including humans.

These are all contributions to science, but they are not your only ones: your work over many years would be difficult to describe in this brief iteration because your lifelong labor, and your principal hobby, has been thinking and devising experiments that will further our understanding of basic problems in biology.  Member of the National Academy of Sciences, recipient of the Selman A. Waksman Award in Microbiology and the William Raveis Exceptional Project Award,  you will undoubtedly continue your scientific quest in your current work on the regulation and the mechanism of tumor suppressor proteins. Lover of music, devoted concertgoer, Branford fellow known for your wit and your pleasure in red wine, your colleagues thank you and wish you continued pleasure in the service of advancing the frontiers of science.