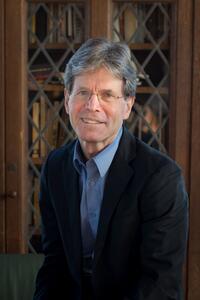 R. Selden Rose Professor of Comparative Literature and of Film and Media Studies

Dudley Andrew, B.A. Note Dame University, M.F.A. Columbia University, Ph.D. University of Iowa, faculty member at Yale since 2000: You are regarded  as one of the foremost film scholars of our time. You had been for many years at the University of Iowa when you arrived at Yale, helping to galvanize film studies here. You provided the ballast for the enlargement of undergraduate film studies and the creation of a Ph.D. program that began two years after your arrival, which has become one of the foremost in the nation.

Your sweeping scholarly work extends to film theory and aesthetics, world cinema, French cinema, and Japanese cinema. You are without question the world expert and foremost expositor of André Bazin, the legendary French critic who was a pioneer of film as an intellectual discipline and remains central to film theory courses today. Your important Bazin biography has been called a landmark in film scholarship and you have continued to edit and translate his work and to engage his ideas and theories, including in your 2010 book What Cinema Is!

Among others of your nine books are the comprehensive and pedagogically valuable The Major Film Theories, an introduction to the work of the most important writers in the field, and Concepts in Film Theory, a continuation of that classic. Your Mists of Regret: Culture and Sensibility in Classic French Film explores the remarkable films of the pre-World War II era and places them in their rich cultural context. Film in the Aura of Art unashamedly forwards film, focusing on several masterpieces, as an art form worthy to stand alongside the other arts. These are important exemplars, but exemplars only, of your striking critical accomplishment.

Your focus on theory and aesthetics and your profound understanding of French literature and philosophy have made you a natural fit for your joint Yale appointment in Comparative Literature, which you served as an excellent chair between 2009 and 2013 and you have been a resource for students with a broader set of intellectual interests than film itself.

It would be impossible to overstate what your presence has meant to film studies at Yale, both to undergraduate teaching and perhaps even more especially to graduate teaching, where the many graduate students whose dissertations you supervised have joined with the dozens you mentored at Iowa to spread the teaching of film and film theory throughout the world and given the Yale program international stature. Your organization of an annual weekend festival to commemorate and screen films of a single past year shows how you have helped bring attention, excitement, and community to the teaching of film as a whole. In this you have not only been a teacher but, as Auden wrote of Freud, a whole “climate of opinion.”

You have been honored as an Officier of the Ordre des Arts et des Lettres by the French Ministry of Culture and have received the Society for Cinema and Media Studies Distinguished Career Achievement Award. As you retire from teaching but never from watching, thinking about, and writing about the films that galvanize and move us, Yale joins these distinguished organizations in paying you homage.