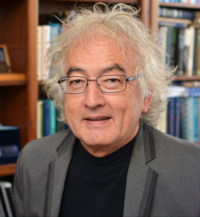 John Harris, B.S. University of Washington, Ph.D. State University of New York at Stony Brook, faculty member at Yale since 1996: You are one of your generation’s outstanding experimental high-energy nuclear physicists, focused on understanding the behavior of nuclear, hadronic, and partonic matter at high energy densities, and as such working to advance the boundaries of our knowledge of the universe.

At Brookhaven Laboratory you were the founder for the STAR collaboration at the Relativistic Heavy Ion Collider, the only spin-polarized collider and first heavy ion collider ever built, which allows physicists to study the primordial form of matter that existed shortly after the Big Bang, and a longtime researcher at that facility. Getting STAR approved, designed, constructed and producing data from day one was perhaps your most signal achievement. You were also a collaborator on the original proposal to initiate a high-energy heavy ion program at CERN, the European Organization for Nuclear Research, one of the world’s largest and most respected centers for scientific study, where the research on particle accelerators helps to uncover what the universe is made of and how it works; and you have collaborated on ALICE (A Large Ion Collaborator) experiments there.

Your research has been about vast spaces, but you have made many contributions in our more intimate spaces here on earth. Perhaps most importantly, scores of students and postdocs have you to thank for your mentorship and would no doubt wish it noted that, throughout your career, you actively worked for diversity and inclusion in your own local research group, the experiments you were involved in, and within the larger field of Physics.

In addition to your many administrative roles at CERN, at Brookhaven, and at ALICE, as well as your multiple other professional advisory and organizing committee roles, you have pulled your weight in the Department of Physics, where you have been the director of Postdoctoral Affairs, the DUS, and on the Committee on Undergraduate Physics Education. When there was an issue in Yale College of what undergraduates should study in science, and how they should study it, you were often called on to bring your down-to-earth (rather than out-in-space) good sense to the academic equation. You were a member of the Yale Science Council, the 2001-2003 Committee on Yale College Education (CYCE), and then the committee to review the CYCE progress in 2010-2011.

Your deep engagement in the Yale community is evident in your election as an inaugural member of the FAS Senate, bringing the same good sense and progressive viewpoint to its committees on diversity and inclusion, expansion, and standards as you brought to other university concerns.

Traveler, backpacker, hiker, biker, snowboarder, surfer, sailor, denizen of the cozy beach community of Short Beach, concertgoer, Dylan and jazz fan, you have wide pursuits and do not fit the picture of the all-consumed scientist. But perhaps there is no line between your work and your life. What you are is an explorer of the mysteries and joys of the universe- -on and beyond our planet. As you retire to continue your journeys, your department hopes that your joy in what is here and what is beyond will continue to bring you pleasure and satisfaction.