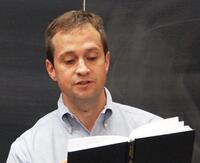 Your scholarship is centered on the seventeenth century, and there you have written on a range of literary and cultural topics, from the poetry of Aemelia Lanyer and Andrew Marvell to the physico-theological speculations of Isaac Newton. Your first book, The Matter of Revolution, concerning the cultural intersection and cross-currents between the English and Scientific revolutions, was widely noted as a  stunning contribution to both literary and intellectual history. It won the Milton Society of America’s James Holly Hanford Award for Outstanding Book and the Modern Language Association’s First Book Prize. Your other work on Milton has also been equally lauded: you twice won the Milton Society of America’s Hanford Award for the year’s outstanding article on Milton. Your recent studies of Milton’s heterodox theology and metaphysics are creating scholarly excitement by tracing the poet’s influence into American religious history.

These professional accomplishments would be enough to cement your place in Yale history – but in your case there is much more. You have been both a legendary graduate teacher and mentor and a wonderful undergraduate teacher. Your undergraduate Milton lecture course, which in other circumstances might have drawn an audience of 20 but in your case regularly attracted well over 100, helped to bring you the Sidonie Miskimin Prize for Teaching, an award that is symbolic of all you gave to Yale students in that arena over many years. Your course has enjoyed and continues to enjoy international success as one of Yale’s free online courses.

Berkeley College was lucky to have you as its eighth master for five years, during which time you gave time, energy, hospitality, and comfort to Berkeleyites, proving yourself a noble and beloved ranking officer of a college named in honor of the Bishop – Dean of Derry and Bishop of Cloyne – who endowed Yale with a gift of land and books in the eighteenth century. And is it possible that someone of such erudition might have been, in his youth, a Whiffenpoof, a gentleman songster? It is indeed. Yalie of many parts, as you retire from Yale to begin a new life as a professor at the University of Toronto, your university knows that while you may roam far, you will always be a part of Yale, one whom your students and colleagues will remember and cherish.