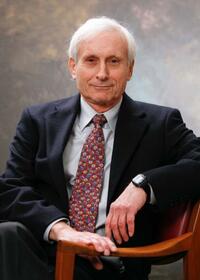 You are a pioneering neurobiologist who has used genetics to uncover the workings of the nervous system. Studying Drosophila, you were the first person to use genetics to characterize the developmental and functional mechanisms of a defined neural circuit in any organism.  Among your accomplishments was the discovery of the first genes shown to affect how synapses work; identification of the first gene to encode an ion channel in any organism; and the discovery of the gene that encodes the protein that forms the junctions between cells, all of which has led to a much more sophisticated understanding of how the central nervous system operates.

In addition to your outstanding accomplishments in neuroscience, you have had a longstanding interest in supporting women’s rights and family planning. This has led you to address one of the most significant issues confronting humanity: population growth. Your interest and passion for examining the ramifications of population growth have made you an intentionally known expert and advocate on this subject. In publications for leading scientific journals, you have written about the impact that population growth has on resources: food and the environment, and on such things as the effects of depletion of water from the effects of population and affluence.

You have also brought this issue home to Yale in your survey courses on population biology, focused on the biological basis and environmental consequences of our current population explosion. Your rationale for teaching this subject has been founded on the deep belief that, since Yale produces so many political and societal leaders, students should be educated on a world issue that is a major driver of human and environmental misery. People from around the world can listen and learn about one of the most critical issues facing our planet from your Open Yale online course.

Your immersion in the population issue has informed your life as well as your teaching. Many years ago, you and three other scientists started a biotech company that developed a molecular biology method for making vaccines, replacing the method of growing live viruses in chicken eggs. When the flu vaccine Flublok was developed from this method and made widely available, and the company sold, you donated the proceeds of the shares to the Population Media Center (PMC).

Among your services to the university, there is none that Yale College has more to thank you for than your investment as the principal investigator in the HHMI-funded undergraduate Howard Hughes research program. For many years, time after time (after time), when grant renewal came around for a program that has supported multiple crucial innovative science programs in Yale College, helping students to pursue their scientific interests and dreams, your leadership and help were the critical factors in winning the college this crucial award.

Scientist who has taught and awakened the moral conscience in many, as you retire from active service, Yale wishes you well in continuing to pursue the passion that is so crucial to the survival of our planet.