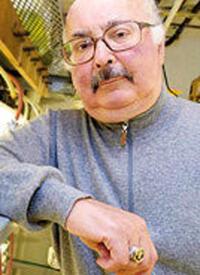 Joel Rosenbaum, B.S. and Ph.D. Syracuse University, faculty member at Yale since 1967: you are an eminent cell biologist.  Your distinguished research career has focused on the biology of the bi-flagellate green alga, Chlamydomonas – a research career which has led to our better understanding of the place that defects of cilia play in the cause of numerous human diseases which are collectively known as ciliopathies.

Your important discoveries happened over years of research. Using biochemistry and electron microscopy, you first elucidated the structure of the flagella, which are flexible tube-like appendages that are responsible for movement of the organism. You determined the internal structure of the flagella, which themselves are composed of an exquisitely beautiful cylindrical array of several protein rods called microtubules, and determined how the cell assembles them, a process that requires the coordinated assembly of many copies of over 600 different proteins.

Subsequently, in perhaps the major accomplishment of your research career – an accomplishment providing an electric moment of discovery, the kind about which researchers dream - your group discovered a motility system in Chlamydomonas that functions inside the flagella, moving materials from the base to the tip, and back again. This process is now known to occur on similar flagella-like appendages, called cilia, that exist in identical structure on most human cells, even though humans and Chlamydomonas are separated by two billion years of evolution. Our understanding of these conditions, materializing directly from your original work with an algal cell, is what has been responsible for significant medical advances.

For your research discoveries on Chlamydomonas, and for your many years of productive and devoted work as a cell biologist, you were awarded the E.B. Wilson medal from the American Society of Cell Biology, the highest honor bestowed by that professional society, joining your colleagues Joe Gall, Joan Steitz, and Tom Pollard in having received that prize.

From your graduate student days, and from your valued postdoctoral experience at the University of Chicago, you became impressed with the influence and inspiration of good teaching, and over the years you made it your business to become the kind of teacher you yourself valued. For years you taught the introductory Biology course, as well as a senior seminar in which the topic focused on key research papers that greatly advanced the field of cell biology. And perhaps your greatest pride is in the graduate students and post docs, now cell biologists in eminent institutions throughout the nation, who studied or worked with you, were grateful for your mentorship, and who in turn were your invaluable colleagues in your laboratory discoveries.

In the university as a whole, you always were concerned with the well-being of the faculty, and as an engaged gadfly you worked to try to  keep the university administration up to the standard you felt a great university should meet. You long insisted that the faculty should have a senate, which, close on your retirement, it now does – a capstone of your years of effort in that area.

Who could have predicted when you began working on Chlamydomonas all those years ago that an entire field of medical knowledge and inquiry would be the result?  As you retire, Yale offers its thanks for your years of teaching and mentoring, and especially for a research career that serves as the paradigm for investigator initiated basic research that leads to unexpected and valuable outcomes.