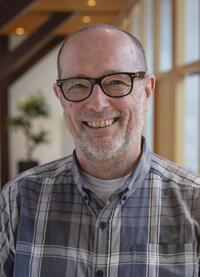 Günter Wagner, Reifeprüfung, College for Engineering, Vienna, Ph.D. University of Vienna, faculty member at Yale since 1991: You are a distinguished, influential, and much honored evolutionary biologist.

Trained in biochemical engineering, zoology, and mathematics at the University of Vienna, you spent six postdoctoral years at the Max Planck Institutes for Biophysical Chemistry in Göttingen and for Developmental Biology in Tübingen before becoming a professor at Vienna. The ongoing focus of your research has been in the evolution of gene regulation as it pertains to the origin of evolutionary novelties; the origin of novel cell types which lead to organismal complexity; the evolution of mammalian and reptilian pregnancy; and the evolution of limbs, to test ideas about the nature and origin of character identity.

Your MacArthur Fellowship—the so-called genius grant, which supports great creativity in all disciplines—recognized your research on the developmental basis of homology: the study of the structure, physiology, or development of different species of organisms based upon their descent from a common evolutionary ancestor. Theoretically and empirically, as the MacArthur recognizes, you are said to have brought the Darwinian idea of homology into the twentieth- and the twenty first- centuries. Your groundbreaking book Homology, Genes, and Evolutionary Innovation, a major synthesis of homology, provided the first mechanistically based theory of what homology is and how it arises in evolution.

As influential as you have been and continue to be as a scientist, you have been equally influential as a Yale citizen. After EEB created an undergraduate track in Organismal Biology for premedical students, you have been the person teaching a marquee course in comparative vertebrate anatomy, which gives students a deep theoretical basis for anatomy that enhances their later study and practice of medicine. You are a rigorous teacher in a very tough class, and it is all the more impressive that your students give you high marks for your teaching, recognizing the course’s high demands, but appreciating the cogency of your presentation. At the same time you have been known as generous and supportive of your lab group and of junior faculty and your colleagues, who admire you and are grateful for your gracious collegiality.

Some faculty members of your distinction limit their influence to their research and teaching, but you never shirked administrative service. From 1996 to 2001, as chair of EEB after its separation from Molecular, Cellular, and Developmental Biology, you had a decisive intellectual role in establishing the future of the department, and in the hiring, mentoring, and tenuring of the younger evolutionary biologists who now make up the department’s core. When Yale’s West Campus was created, you served as chair of the Yale Systems Biology Institute advisory committee from 2010 to 2013. And you have always been supportive and encouraging of those in departmental leadership roles.

Your colleagues understand your need to go home to Vienna; at the same time, they are saddened to see you leave, as it were, in mid-flight.