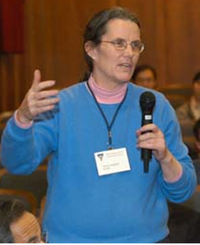 Dana Angluin. B.A., Ph.D. University of California at Berkeley, faculty member at Yale since 1979: You are a computer scientist known for foundational work in computational learning theory and distributed computing.

Through your research and service, you helped establish the theoretical foundations of Machine Learning. You integrated Learning Theory with Computational Complexity Theory and demonstrated that algorithms can learn even if there are errors in their data. Where previous researchers considered algorithms that learned by passively observing their environment, you established the theory of algorithms that learn by testing hypotheses and asking questions of teachers. In the service of this important field, you founded the annual Conference on Computational Learning Theory, which is now in its thirty-fourth year.

You have also done foundational work in the theory of distributed computing, which studies how computers can cooperate to solve problems when connected by a network. Early in your career—before such systems became commonplace with the development of the Internet—you asked the fundamental question of how the power of such a system would be affected if these computers all ran the same code and could be distinguished only by their position in the network. Later, you and other researchers at Yale developed the model of population protocols, which went even further by taking away the structure of the network. Your population protocol model has been used to represent computation by systems ranging from swarms of tiny robots to collections of molecules in a test tube. Its impact on distributed computing was recognized by the award to you of the 2020 Dijkstra Prize, one of the highest honors in this field.

Undergraduates have praised you for your teaching, amazed by the patient way you could think your way into their thought processes, waiting until they themselves saw that they were wrong, and then helping them work backwards until they figured the source of their confusion. You were patient and firm, but at the same time you managed to make your students love their work: As one student wrote, “Every week, I would have a ‘Mind BLOWN’ moment over something that Professor Angluin would teach, and it made me genuinely enjoy classes.”

As for graduate students, over and over again in the acknowledgment sections of their dissertations students have talked about your help in writing and sharpening their ideas – whether or not you were on their committee. You are present for every instructional and department event that matters to students and that contributes to their education and well-being. You attend every student presentation and provide encouragement: You don’t just say “good job” but, regardless of the topic, you ask meaningful questions that show an understanding of the presentation and lead the presenter to seeing even more value in their own work. Your colleagues, who have benefited from the course notes and homework assignments you have developed in teaching core courses, term the careful composition of your courses as “exquisite.”

Given all of this, it is no surprise that you have won the trifecta, three of the most distinguished  teaching prizes Yale College has to offer: the Dylan Hixon Prize for Teaching Excellence in the Sciences; the Byrne/ Sewall Prize for distinguished undergraduate teaching; and finally, last year, the cherished Phi Beta Kappa DeVane Medal, for which you were chosen by students elected to Phi Beta Kappa. Next year you will be deeply missed by students and colleagues alike– and even though they won’t know it, by the students of the future who won’t have you to teach and watch over them.