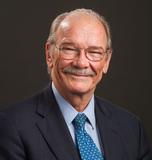 William Sledge, A.B. Washington and Lee University, M.D. Baylor College of Medicine, faculty member at Yale since 1977: You are a distinguished psychiatrist, psychoanalyst, health services investigator, and innovator of clinical services. When you returned to Yale and New Haven in 1977, after an internship in Philadelphia, a post-doctoral fellowship and residency in Yale’s Department of Psychiatry, and a term as a flight surgeon in Texas, you repeatedly have been entrusted with administrative roles in your field: Assistant Clinical Director at the Yale Psychiatric Unit, Director of Graduate Education for the Department of Psychiatry, Chief of the Individual Psychotherapy Unit, and Director of the Outpatient Division at the Connecticut Mental Health Center are some of the many roles you played on your way to your leadership roles as Clinical Director of the Connecticut Mental Health Center and Medical Director of the Yale-New Haven Psychiatric Hospital.

Distinguished as your role in Psychiatry has been, however, that work is not the subject of this tribute today. For alongside this role, you have had an equally distinguished role in Yale College. In 1995, you and Betsy Sledge, the long-term writing tutor in Silliman College, became the Master and Associate Master of Calhoun, bringing to those roles your energy and care and making the ‘Houn a college of vibrant activity for a decade. Your Master’s Teas were legendary, especially (but not only) in the arts. You and Betsy seemed to be able to attract the most important dancers, writers, and theater people from everywhere, enabling students to engage with them in intimate settings. And you otherwise made Calhoun a warm and welcoming community for several generations of Hounies. No one ever said that it is necessary to be a psychiatrist to be a Head of College. On the other hand, no one has ever said that it hurt, either.

Beyond your busy medical and administrative life in two sectors of the University, you also taught and were a full part of campus life. In addition to your seminars and thesis advising in Psychiatry, you also frequently taught in Yale College on subjects related to your field, in seminars such as “Freud’s Theory of Mind,” “Personal Fulfillment and Intimacy in the Contemporary American Family,” and in 2017 “Humanities and Medicine: Uncertainty in Medicine.” Drawing further on your administrative gifts, you were appointed Chair of the Council of Masters for three years, working to bring onto the same page a dozen masters who, hearsay suggests, might occasionally have difficulty agreeing that the Yale color is blue. Importantly, you accepted the appointment from President Levin as Chair of the Student Life Planning Committee, one of the two presidential advisory groups for the planning of the new residential colleges, forging the way for the first expansion of Yale College in a half century.

We know, William Sledge, that you know how to fly, and, as a diver, to explore the ocean’s depths. We are so glad that you found a way to stay on solid ground and to contribute so much to Yale College, as well as Yale Medicine, in your four decades of distinguished and devoted work.