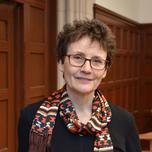 Deborah Davis, B.A. Wellesley College, Ph.D. Boston University, faculty member at Yale since 1978: Your scholarship has tracked the rise of China across five decades, one of the most far-reaching and important societal transitions in modern world history. You have made fundamental contributions toward understanding the many complex processes that attended the shift from Maoist China to market China. You never have lost sight of the fundamental need to challenge facile rhetoric and have been a strong and clear voice for evidence-driven, social scientific study of China. You consistently have journeyed outside the common frames of reference of the political scientists and economists to encompass a panoramic range of fundamental societal issues involving socioeconomic inequality, stratification, and mobility; housing; urban life; consumers and the consumer revolution; life-course issues from childhood to old age; the SARS crisis; education and occupation; family life and gender roles – the list could go on for quite a while longer. Through nine authored or edited books and so many articles, you have contributed to building a basic place for sociology in the scholarly study of China for years to come. Importantly, you often have worked in partnership with Chinese scholars during this intellectual journey. In so doing, you have become a revered leader, colleague, and mentor to so many in China itself.

In addition to your contributions as a pioneering scholar of China, you have also been a dedicated member of the Yale community and selfless team player. Your excellence in undergraduate teaching, recognized by the Lex Hixon ;63 Prixe for Teaching Excellence in the Social Sciences,  has extended beyond the campus gates.  You have run a summer fieldwork seminar where Yale students work collaboratively with students from Hong Kong and China. You have served as Trustee of the Yale-China Association spanning the better of part of four decades and tirelessly assisted the University in many administrative roles, including as Chair of the Council on East Asian Studies, and Co-Chair of the Women Faculty Forum. You were Chair of Sociology at a time when the department was in crisis and in need of rebuilding, keeping the ship afloat against the odds. Beyond Yale, it is no surprise that you have been on multiple professional committees and reviewed and edited for countless leading journals. In the wider community, you are spotted frequently at many Yale music events with your accomplished husband - pianist, theorist, composer and pedagogue Michael Friedmann. Since we cannot imagine a finer advocate for the sociological study of China nor a better citizen to Yale, we imagine celebrating you with the ancient traditional Chinese Plum Blossom Melody, “praising those with high moral integrity and unyielding courage, tempered in depth of experience.”