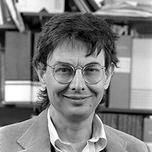 Drew McDermott, B.S. and Ph.D. Massachusetts Institute of Technology, faculty member at Yale since 1976: Your achievements in artificial intelligence, cognitive science, and philosophy are unparalleled. You clarified the vagaries of planning and reasoning with hard logic, and you placed foggy questions of philosophy on crisp computational footings. In the end, by trying to understand how to make machines “intelligent,” you helped all of us to better understand our own intelligence.

In classical logic, new information never invalidates previous conclusions, but we all know that isn’t how reasoning works in real life. Your work in non-monotonic logic explained this in a way that was both rigorous and programmable. Your extensions of formal methods to deal with time and space and change, a recurring theme throughout your career, were applied to robots and to the web. You developed automatic systems to enable robotic devices to select sequences of actions and to put a soccer ball in the goal. You created novel ontologies to allow disparate online agents to communicate unambiguously. Your remarkable contributions were recognized by election as a Fellow of The American Association for Artificial Intelligence in the very first year of the award.

As one of the world’s greatest LISP programmers, you truly elevated coding to an art. This was not without your signature humor, as when you christened the planning language CONNIVER, as a successor to PLANNER. You wrote foundational textbooks to teach others the practice of artificial intelligence programming, and more recently brought your expertise to Haskell and Scala. Your classical critique of “Artificial Intelligence and Natural Stupidity,” in which you took the practitioners of the young field of artificial intelligence (yourself included) to task for overly rosy accounts of their work, remains a relevant and applicable caution to this day.

As your body began to keep your doctors busy, your intellect soared to the broader questions raised by artificial intelligence, particularly consciousness. Your book Mind and Mechanism expounds a closely-reasoned computational theory of consciousness and remains a challenge for philosophers. John Searle can no longer just argue about syntax in his “Chinese Room” argument that is a widely known challenge to AI; because of your work one now needs a coherent computational response to it.

Your colleagues in AI appreciate your work in organizing the International Conference on Automated Planning and Scheduling and the International Planning Competition, which are now the most prestigious venues for researchers in planning and scheduling. Your colleagues at Yale appreciate your service as Director of Graduate Studies and Chair of the Computer Science Department. Your students appreciate your insightful guidance and solid advice. And everyone appreciates your incisive mind, your creativity, your fairness, your scrupulous regard for the truth, and your dry humor. Not every brilliant professor of computer science aspires to write a novel. But as you undertake this new endeavor, your colleagues look forward to what will emerge from someone who understands both the human brain and the human heart.