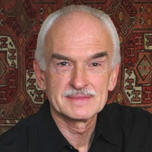 Vladimir Alexandrov, B.A. Queens College, CUNY, Ph.D. Princeton University, faculty member at Yale since 1986: You are one of the foremost scholars and teachers of Russian literature of your generation. Born in Germany to a Russian émigré family, you grew up in New York City. After deciding (in your words) that you’d, “learned enough about the natural world to suit your needs at the time but didn’t understand [yourself] or other people very well at all,” you switched to studying literature and the humanities and made a complete transformation of field, studying comparative literature first at UMass Amherst and then at Princeton. You are likely one of the only current Yale faculty members trained in an undergraduate discipline utterly removed from the one you profess.

During your thirty-two years at Yale, you have taught undergraduate and graduate courses on Russian literature and culture and on literary theory, and served as Chair of Slavic Languages and Literatures for half that time. Your legendary and electrifying lecture course on the novels of Tolstoy and Dostoevsky was for many years the largest undergraduate literature course in Yale College. For this and several other popular undergraduate courses, including a seminar on Nabokov (on whom you have published some of the most vital scholarly work), you were awarded the Sidonie Miskimin Clauss ‘75 Prize for Teaching Excellence in the Humanities in 2006. Your graduate students, equally shaped by your extraordinary seminars, teach at prominent colleges and universities around the country, and a number of them, together with colleagues at Yale and other institutions, presented you with a Festschrift in 2013.

Your scholarship, formative for the last decades of Russian literary study around the world, has focused on aspects of 18th-, 19th-, and 20th-century Russian literature and culture, and on literary and cultural theory, with a special focus on the work Andrei Bely, Vladimir Nabokov, and Leo Tolstoy. Among many other achievements, you organized the Western delegation of scholars attending the first international conference on Nabokov - a writer banned in the USSR until perestroika - that was held in the Soviet Union in 1990. Your work has been translated into Russian and other languages, and your Limits to Interpretation: The Meanings of Anna Karenina won the 2005 biannual Aldo and Jeanne Scaglione Prize for Comparative Literary Studies from the Modern Language Association of America for outstanding scholarly work in the field of Slavic languages and literatures. In all of your writing on Russian literature, you have argued forcefully for our ethical responsibility as readers to do just that. In this way, you have deepened our sense of literary form and of the complexities and the obligations involved in literary response.

Your scholarly career took an unexpected turn some eight years ago when you began to research a book that became The Black Russian, the biography of a forgotten African American, the son of former slaves in Mississippi who became a multimillionaire impresario in tsarist Moscow, lost everything in the Revolution, and reestablished himself as the “Sultan of Jazz” in Constantinople. You are now hard at work on another biography—this one of Boris Savinkov, a Russian revolutionary terrorist, political activist, government minister, and writer, that is entitled To Break Russia’s Chains: Boris Savinkov’s Wars against the Tsar, Lenin, and the Bolsheviks.

For decades, you have been at the core of Russian literary study at Yale and beyond. You have deepened our understanding of a whole range of major writers, introduced us to figures we have never heard of, and inspired generations of students by showing them just how complex, important, and exciting an encounter with great literature can be.