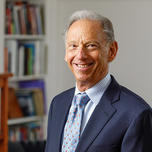 Alan Kazdin, B.A. San Jose State University, Ph.D. Northwestern University, faculty member at Yale since 1989: You have defined what it means to be an academically-oriented clinical psychologist, not only for legions of graduate students and faculty colleagues at Yale, but for the field overall. You have done so by your example, by thinking critically and creatively about the causes of and treatments for behavioral disorders in children, and by pursuing a rigorous scientific approach throughout your career. With over 750 publications, including 50 books, you have set a record of productivity that is as likely to be surpassed as it is for the same person to be struck by lightning more than once (to be precise, about 1 in 9 million). In considering the methodological requirements for strong inference principles in clinical psychology, you literally wrote the book (now in its 7th edition)! Thousands of parents have you to thank for your work at the Yale Parenting Center and your books on parenting: The Everyday Parenting Toolkit  and The Kazdin Method for Parenting the Defiant Child and your many other works which have helped turn the course for the better in many a challenging family situation.

Your passion and effectiveness as a teacher and mentor are clearly recognizable in the dozens of former graduate students, postdocs, and trainees who are now in leadership roles at major universities and organizations throughout the world. Your signature graduate level course, “Research Methods in Clinical Psychology,” was widely viewed as one of the most engaging, challenging and useful by generations of students.

Your abilities and charisma have brought you important leadership roles. You have been Chair of the Yale Department of Psychology, Director of the Yale Child Study Center at a challenging moment in its history, and the President of the American Psychological Association, where you pursued three major initiatives: articulating psychology’s contribution to the grand challenges of society; addressing interpersonal violence; and addressing post-traumatic stress disorder and trauma in children and adolescents. You have been recognized by your peers with virtually every major award given in your field, including the Outstanding Research Contribution by an Individual Award and Lifetime Achievement Award from the Association of Behavioral and Cognitive Therapies, the Outstanding Lifetime Contributions to Psychology Award and Distinguished Scientific Award for the Applications of Psychology from the American Psychological Association, and the James McKeen Cattell Award from the Association for Psychological Science. But as acclaimed as you are, you never have lost your sense of modesty or humor, applying your keen wit to observe the absurd at any (and possibly every) opportunity. It seems that you took to heart the words of Francis Bacon: “Imagination was given to man to compensate him for what he is not; a sense of humor to console him for what he is.”

It is often said of people who become clinical psychologists that they have a strong personal connection to their chosen area of inquiry. Given your focus on the treatment of aggressive and antisocial behavior in children, one might therefore surmise that you were perhaps obstreperous as a child. Yet, an online survey completed by those familiar with your childhood revealed exactly the opposite: Kazdin was in fact a very good boy! One thing is certain: all of your patients, students, and colleagues delight in the impish charm that has given you an advantage in your work, teaching, and life, and has made knowing you a privilege and joy.