Professor of American Studies and History 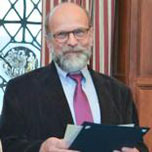 Jean-Christophe Agnew, B.A. Princeton University, Ph.D. Harvard University, faculty member at Yale since 1978: You are your generation’s most elegant thinker on the intersections of capital and culture across three centuries and more of American history. From Atlantic world theater in the colonial era, to the rise of our modern promotional, commercial, and increasingly capitalized culture in the mid-nineteenth century and after, to the accelerated pace of consumerism-as-citizenship in the postwar period, you have given us fresh insights and angles of vision on central questions of American life in a body of interdisciplinary work that spans four decades.

Worlds Apart: The Market and the Theater in Anglo-American Thought, 1550-1750 remains a model of the craft, ingeniously deploying an innovative range of disciplinary tools and archival and interpretive practices to wring from theater and theatrical forms abiding insights on a rising era of commerce and the dawning experience of the modern marketplace. “The Consuming Vision of Henry James” and other essays from the 1980s inspired an entire generation of American Studies students with a combination of finely grained textual readings in the service of understanding anew broad societal principles—the sweep and movement of history itself. Your running meta-commentary on the “cultural turn” in historiography, from “Coming Up for Air” to “Capitalism, Culture, and Catastrophe” to “Main Currents in Cultural History,” has been a correcting gyroscope for two generations of practitioners, stabilizing their efforts as they navigate that rich but turbulent zone where the empirical and the ideational airstreams cross and inflect one another.

Your teaching and mentorship are the stuff of legend even at Yale, a place well known for extraordinary teaching.  Your undergraduate lectures—especially your hundreds of lectures across three decades for “The Formation of Modern American Culture” (famously called FORMAC)—have each and every one been a thing of beauty: elegant in expression; ornate in interpretation; deep in evidentiary grounding across a wide array of genres, forms, and archives; incandescent in insight; blazing in intellectual leadership for undergraduates, graduate T.A.’s, and the occasional drop-in colleague alike; and polished to a high gloss.

Your generous and impactful graduate mentoring produced a generation and more who today represent the leadership in the fields of U.S. historiography and American Studies—celebrated authors, filmmakers, and museum curators, journalists, major book award winners in the academy and beyond, university department chairs, and American Studies Association presidents. And to read a letter of recommendation by Jean-Christophe Agnew is to witness the very meaning of mentorship, intellectual engagement, and generosity—highly effective for the scores of candidates in question, but also a true intellectual pleasure and education to the search and selection committee members whose task it is to read them. Yours has been the kind of powerful intellectual impact that your students and colleagues will never forget and that countless others, receiving your gifts only at second and third remove, may never fully know.

It is both an energizing and a melancholic beauty of our profession that most debts are paid forward and not back; the debt owed to you is being paid every single day, by those who know you and also by thousands of others who have no way of knowing.