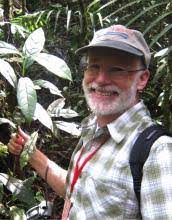 Michael Donoghue, B.S. Michigan State University, Ph.D. Harvard University, faculty member at Yale since 2000:  you are one of the world’s premier botanists and evolutionary biologists. Your powerful approach to understanding the diversity and evolution of plants resulted in countless discoveries that have enhanced our understanding of the green universe surrounding us. In over 250 scientific papers you have made an impact on a multitude of areas: seed plant and angiosperm phylogeny, biogeography, species concepts, character evolution, phylogenetic methods, rankfree classification, paleobotany, ecology, the analysis of large data sets, and, last but not least, the phylogeny and evolution of your favorite organismal groups: Dipsacales and especially Viburnum. But you are also one of the premier systematists of the past three decades — few others, it is emphasized, have had a bigger impact on the entire field of systematics as you.

While your discoveries are notable and the body of your work extensive and distinguished, your colleagues also emphasize your continual ability to think out-of-the-box and to be consistently at the forefront of new ideas and approaches that ultimately transform the field.  This ability to think creatively and imaginatively at every turn has set you apart and given you your special stature as an intellectual leader.

Given your outstanding accomplishments, it is not a surprise that you are a member of the National Academy of Science and have won nearly every major award in your field, including the Asa Gray Award of the American Society of Plant Taxonomists, the Distinguished Fellow Award from the Botanical Society of America, and the Dahlgren International Prize in Botany.

But it is rather amazing that you have been able to combine your innovative science with significant administrative work:  You have played a prominent role in dozens of committees and in DIVERSITAS, an international scientific organization focused on biodiversity and global change. You have been Director of the Harvard University Herbaria, the Director of Yale’s Peabody Museum of Natural History, and its Curator of Botany.  You have served as Director of Marsh Botanical Garden and the Yale Institute for Biospheric Studies and as president of multiple scientific societies. And you were the first Vice President of Yale’s West Campus, responsible for developing an overall blueprint for programmatic initiatives, working with faculty to develop specific details of new research programs and core facilities, and coordinating the program for library, museum and other initiatives.

Even more impressive, perhaps, for one of your stature and distinction, is the overwhelming warmth with which you are perceived among the many graduate students and post-doctoral students you have mentored, as well as colleagues in your field with whom you work.  You bring the same dynamic and engaging style apparent in your lectures to the quality of your relationships. Your openness, enthusiasm, attentiveness, generosity with your time and ideas, and what your colleagues note as your “light heartedness” make sharing work with you a continual joy. For the substance of your work, your pioneering and innovative spirit, and the variety of contributions you have made to your field and to Yale, your colleagues salute their luck in having you within their ranks.