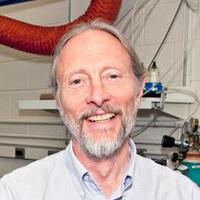 Marshall Long, B.S. University of Montana, Ph.D. Yale University, faculty member at Yale since 1979: The Yale Alumni Magazine once told the story of how, as a small boy on a Montana ranch, when spring came you would “grab a propane torch, drive the family pickup out to the fields and set ablaze all the bundles of wheat straw that the sheep had not eaten over the winter, and then watch in awe as the plains burned in preparation for plowing.” That early fascination with combustion has led far away from the fields of Montana to your eventual field of study and career in the development and application of new laser techniques to the study of combustion.

You have studied the mystery of flames, dissecting them species by species in an attempt to understand combustion well enough to be able to propose pollution-reducing methodologies and more efficient use of fuels. You work has helped elucidate the combustion process so that a series of mathematical equations could be used to solve combustion systems in various configurations. The results of the combined experimental/mathematical model could then be applied in the real world to engineering – for example, a new diesel engine or a gas turbine. This enables an understanding of how the device will actually work before anyone goes through the difficult and expensive process of building it.

You came to Yale in an interesting way. In 1975 you participated in an NSF summer program that gave you a research opportunity. That summer you were given a room in Silliman, ate lunch at Commons, and played ping-pong at a table set up in one of Werner Wolf’s labs on the fourth floor of Becton. That experience must have been scientifically and personally fulfilling enough to bring you back to Yale as a graduate student - - and while you have traveled far, Yale has been your professional home base ever since.

Your frequent collaborator at Yale has been Mitch Smooke, and with him and your students you have collaborated on projects funded by, among others, the NSF, DOE, AFOSR, and NASA. Your projects have involved detailed computations and measurements in laminar flames in a variety of experimental configurations. The initial work on these laminar flames considered the case of flames burning in earth’s gravity. More recently, you have started to consider the case where no gravity is present. The experiments were performed on board NASA’s KC-135 microgravity aircraft – the so-called “vomit comet.” Your experimental research has culminated in one of five combustion projects selected to be performed on the International Space Station (ISS). Such experiments can lead to practical applications: An experiment about soot formation that matched the space station combustion data, for example, could help scientists design optimal fire safety protocols in space, as well as discover how to minimize pollutant soot emissions back on earth.

Along the way, with your gift for invention, you have developed software for acquiring and processing digital images which you have made available free of charge to interested users. In addition, as part of your dedication to technical transparency, you have provided diffusion flame burners to interested researchers and collaborators.

When not teaching or collaborating with your graduate students and colleagues on your research, or spending time with your family, you are a man of the open spaces, who has land in Taos and rides his motorcycle as far away as Katmandu. As you continue to explore the world by cycle, Yale thanks you for your years of exploring, investigating, and explaining one of the important mysteries of nature.