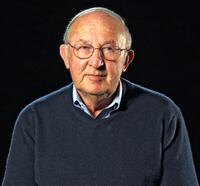 Charlie Baltay, B.S. Union College, Ph.D. Yale University, faculty member at Yale since 1988:  You are a world-renowned cosmologist – with a remarkable story. Born in Hungary, your family lived in a Budapest suburb until 1945 when the Russians invaded; escaped first to western Hungary where you survived bombing that demolished your house while you were huddled in the basement; reached Germany where the Nazis were after you; survived the American bombing of Germany; and ended up in Bavaria before your family finally was able to immigrate to the United States in 1950. You were thirteen.

The discontinuity of your schooling did not seem to affect your educational progress. After high school in Long Island you went to Union College, which offered you a bigger scholarship than MIT or Princeton. On your graduation your freshman physics professor introduced you to his friend Bill Watson, who was department chair at Yale and who accepted you on the spot as a graduate student – and the rest is history.

As a physicist, you are an experimentalist, concentrating on fundamental issues, but your areas of investigation have never been static. Yours is the restless questing of a curious intellectual, who has moved from particle physics to astrophysics to cosmology as times have changed, new frontiers have opened, new technology has been developed, and you have found the next thing you found exhilarating. As a scientist, you are perhaps best-known for being responsible for the demotion of Pluto, but this is an incomplete picture of your work. You have evolved in different areas, collaborating with colleagues across the nation and around the globe, and bringing distinction to your research agenda and your university.

In the nineteen sixties you used data from the Brookhaven and Stanford Linear Accelerator (SLAC) laboratories to study the properties of quarks – which make up protons and other less well-known atomic particles – and you explored the conditions under which the conservation of charge and parity is violated to help us understand the imbalance between matter and antimatter in the universe. In the nineteen seventies, you studied neutrino interactions at the Fermi National Laboratory, making critical measurements and finding evidence of a new quark flavor named “charm.” In the nineteen eighties and nineties, you served as co-spokesperson of the SLAC Linear Collider experiment to carry out precision measurements of the unified weak force and electromagnetic force, via a particle known as the Zo.

More recently you have been fascinated by astrophysics and cosmology, studying the nature of Dark Energy, the mysterious component we know essentially nothing about but which makes up three-quarters of our universe. This is done both from ground-based telescopes around the world, and from a space mission, formerly WFIRST, now the Nancy Grace Roman Space Telescope, via the study of distant Supernova explosion events. As usual, exploring new and evolving physics and learning the “new trades” this requires have kept your enthusiasm at a high level. ”Wow” is an exclamation you have been heard to utter about the excitement of your new involvement, emblematic of the wonderment and joy you find in science, which for you is not work, but a vocation.

On first receiving your Ph.D. from Yale, you took a job at Columbia – a place where you thrived, had wonderful colleagues, and were able to do good science. But the lure of Yale – the place of your teachers and mentors, Horace Taft and Jack Sandweiss, a good place for family, and near to the seashore and sailing you love – was irresistible. “I like Yale,” you said when Columbia tried to retain you. It can be underlined that, without question, Yale also likes you, Charlie Baltay, and feels very lucky and privileged that you have brought your accomplishment, collegiality, and loyalty to your graduate alma mater.