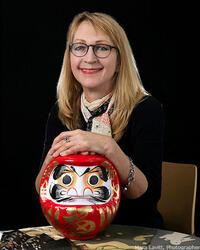 Frances Rosenbluth, B.A. University of Virginia, Ph.D. Columbia University, faculty member at Yale since 1994, died of glioblastoma on November 2, 2021, at the age of sixty-three.

A comparative political economist, she was born in Osaka, Japan, where her parents were Presbyterian ministers, and grew up there and in Taiwan. Her first book, Financial Politics in Contemporary Japan, took on scholarly orthodoxy when she challenged assumptions about Japan as a unique culture, where political and economic dynamics that prevailed elsewhere had to be treated differently. This, as well as her early analysis that the Japanese economy was neither as efficient nor as viable as it appeared to most commentators, proved to be right. Work on Japan was a continuing thread throughout her career, both in articles and in her books, among them The Politics of Oligarchy: Institutional Choice in Imperial Japan and Japan’s Political Marketplace (both with Mark Ramseyer) and Japan Transformed: Political Change and Economic Restructuring (with Michael Thies). For several years she was vice president for international affairs at Waseda University, flying back and forth between the United States and Tokyo on an almost monthly basis.

Gender was another abiding interest throughout Rosenbluth’s career. With Torben Iversen she published Women, Work, and Politics: The Political Economy of Gender Inequality, which become a standard work on the gender wage gap and female underrepresentation in politics. In 2020 she and Nannerl Keohane, former president of both Wellesley and Duke, co-edited Women & Equality, a collection of essays in the journal Daedalus by female academics, journalists, lawyers, and practitioners, presenting a kaleidoscopic picture of the present complexities of the battle for equality.

Rosenbluth’s work on gender inequality went beyond scholarly analysis. One especially gratifying and important success of her service as deputy provost at Yale was attracting a major gift supporting a sixth university-affiliated childcare center, the Nest at Alphabet Academy, located on Science Hill at the Yale Divinity School.

Rosenbluth had lately turned her focus to democracies and their challenges. Her wide-ranging book with John Ferejohn, Forged Through Fire: War, Peace, and the Democratic Bargain, considers the ways in which wars have shaped political landscapes throughout history. Most recently, her book with Ian Shapiro, Responsible Parties: Saving Democracy from Itself, examines the features of political parties and democratic competition that contribute to voter alienation, and what the best reforms might be.

Rosenbluth sustained this scholarly agenda while also teaching both undergraduates and graduates to great acclaim and investing herself in administrative work at Yale and beyond. Her undergraduate course “Sex, Markets, and Power” was capped at 460 students — the number that could fit into the Law School auditorium. Her other lectures and seminars were routinely oversubscribed. She won both the Lex Hixon ’63 Prize for Teaching Excellence in the Social Sciences and the William Clyde DeVane Medal for Teaching Excellence in Yale College.

Nor did her heavy investment in undergraduate teaching come at the expense of the many dissertations she directed and the time, care, and attention she lavished on the Ph.D. students whose futures meant so much to her.

Rosenbluth was the first female chair of the Department of Political Science; the Deputy Provost for the Social Sciences and Faculty Development; the director of the Program in Ethics, Politics, and Economics; the Director of Undergraduate Studies for East Asian Studies; the chair of the publications committee for Yale University Press; the chair of the Leitner Program in Political Economy as well as, most recently, the co-director of the Leitner Program on Effective Democratic Governance at the Jackson Institute for Global Affairs.

Anyone who ever saw Professor Rosenbluth at home — cooking, hiking, walking her dogs with Ian and her sons — would imagine her entirely focused on family life. The equal level of energy that she devoted her scholarship is what Greg Huber, Forst Family Professor and chair of Political Science, had in mind when describing her as a “force of nature” and as a “ceaseless advocate for her students, peers, and the larger Yale and scholarly communities.”