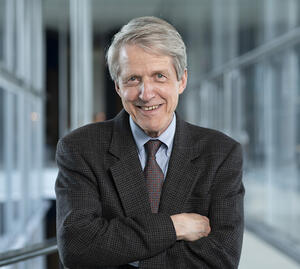 Bob Shiller, B.A. University of Michigan, Ph.D. M.I.T., faculty member at Yale since 1982:  You are an economist, trained in the mainstream, whose work moved orthogonally to much of orthodox financial economics and led you to be honored with the 2013 Economics Nobel Prize for the “empirical analysis of asset prices.”

Your contribution, which signaled the growth of behavioral economics, demonstrated that stock prices fluctuate much more than can be explained by economic fundamentals. It suggested that people’s attitudes show excessive volatility with respect to news and short-term events – a point worth remembering on the next terrible day in stock markets.

Yours is quite a story. As you tell it, you were not a good student as a child, restless, talkative, and hard to manage in a classroom. You were, however, a great reader, insatiably curious, and you had a passionate interest in the kind of scientific observation and detail that the ordinary person might ignore. As you grew, chose a career, and went on to graduate school, you continued to be a bit different in interests and approach from your peers. They tended towards theoretical, highly technical papers that could only be understood by those in the field. You had, as you once said about your MIT mentor Franco Modigliani, “a really lively interest in the real world,” and violated economics profession norms, writing newspaper columns and scholarly trade books in addition to technical academic books and papers.

You have been enormously productive. In over 150 papers and countless books, often in collegial collaborations, you have investigated the interface of behavioral economics, financial markets, and macroeconomics, exploring the implications of a broader view of human behavior than the highly rational approach usually assumed by economists. You have called some of your work “eccentric” and admitted that colleagues’ reactions had sometimes caused you pain. However, “creative and innovative” might be better descriptions for that work. Your story shows that going left while others go right can lead to pathbreaking ideas. Your interest broadly in the sciences and social sciences, particularly in psychology, partially influenced by your wife, herself a psychologist, yielded insights that many others did not have, and in the end helped give the field of behavioral finance more validity.

Your best-known book, Irrational Exuberance – the phrase itself has entered the language as a shorthand for a dangerous mindset – warned early on, when the stock market was at its height, that the market had become a bubble. And you continued to emphasize that theme, predicting in 2007, one year before the Wall Street crash, the imminent collapse of the housing market. Again on the practical side, the company Case Schiller Weiss, launched with your colleague Karl Case and former student Allan Weiss, led to the creation of the Case-Shiller Index, which has become the leading measure of U.S. residential real estate prices, tracking changes in the value of residential real estate nationally. Your insights were always buoyed by your foundational understanding of economics and econometrics; but it was the imagination that took you beyond this foundational understanding that inspired your most influential work.

You did all this while teaching and mentoring at Yale. Your popular undergraduate course “Financial Markets” always needed three or more teaching fellows to oversee its sections. Your life story offers lessons to those who see the world a bit differently and persist through that difference. That is what you did, and your colleagues, honoring you at your retirement, rejoice that you brought your independent thinking to your pioneering research and to the ranks of Yale professors.