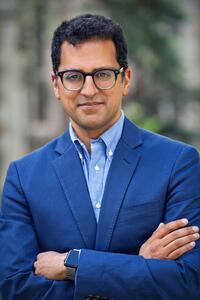 Hussein Fancy joins Yale as an Associate Professor of History from the University of Michigan, Ann Arbor.  His research focuses on the social and intellectual history of religious interaction in the medieval Mediterranean.  In particular, he is interested in projects that combine the use of Latin, Arabic, and Romance archival sources.  His first book, The Mercenary Mediterranean, which received multiple awards including the Herbert Baxter Adams Prize for best first book in European History from American Historical Association, examined the service of Muslim soldiers from North Africa to the Christian kings of the Crown of Aragon in the thirteenth and fourteenth centuries.  Far from marking the triumph of toleration, he argued, the alliance of Christian kings and Muslim soldiers depended on and reproduced ideas of religious difference.  He is currently completing two books.  The first, entitled The Impostor Sea: The Making of the Medieval Mediterranean, follows the activities of criminal merchants—pirates and smugglers—to rethink the relationship between religion and trade.  Rather than “enemies of all,” this book argues that these figures were central to the making of new legal, religious, and racial boundaries in the late medieval Mediterranean.  The second, entitled The Eastern Question, examines western views of Islam from the seventh century to the present, arguing that both positive and negative images of Islam across history share the same polemical genealogy.  He was a junior fellow of the Michigan Society of Fellows, a Carnegie Scholar, ACLS Fellow, and Rome Prize Fellow.  He holds a B.A. in English from Yale University and a Ph.D. in History from Princeton University.