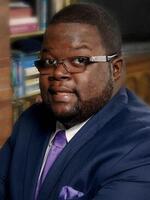 Braxton D. Shelley, a musicologist who specializes in African American popular music, is a tenured associate professor of music, of sacred music, and of divinity in the Department of Music, the Institute of Sacred Music, and the Divinity School. His research and critical interests, while especially focused on African American gospel performance, extend into media studies, sound studies, phenomenology, homiletics, and theology.
After earning a BA in Music and History from Duke University, Shelley received his PhD in the History and Theory of Music at the University of Chicago. While at the University of Chicago, he also earned a Master of Divinity from the university’s Divinity School. His first book, Healing for the Soul: Richard Smallwood, the Vamp, and the Gospel Imagination (OUP, 2021) develops an analytical paradigm for gospel music that braids together resources from cognitive theory, ritual theory, and homiletics with studies of repetition, form, rhythm and meter. His second book, An Eternal Pitch: Bishop G. E. Patterson and the Afterlives of Ecstasy, is under contract with the University of California Press. Prof. Shelley’s work has been awarded the Alfred Einstein Prize and the Paul A. Pisk Prize from the American Musicological Society, the Jaap Kunst Prize from the Society for Ethnomusicology, the Adam Krims Award from the Society for Music Theory’s Popular Music Interest Group, the 2016 Graduate Student Prize from the Society for Christian Scholarship in Music, and the 2018 Dean’s Distinguished Dissertation Award from the University of Chicago Division of the Humanities, he has presented his research at Amherst College, Brandeis University, Columbia University, Duke University, Northeastern University, Northwestern University, SUNY-Stony Brook, Tufts University, the University of Massachusetts-Amherst, and Yale University, as well as at the annual meetings of the Society for Christian Scholarship in Music, Music Theory Midwest, the Society for Music Theory, and the American Musicological Society.
Professor Shelley’s scholarship is enriched by work as both an active performer and ordained minister. His itinerant preaching and music ministry takes material form in the 2018 CD, Sermons in Song, recorded with his recording choir TESTIMONY, a compilation of compositions which have been performed in venues including the Gospel Music Workshop of American and the Hampton University Ministers’ Conference.
‹ Claire Roosien up Hannah Shepherd ›
Additional NavigationClose