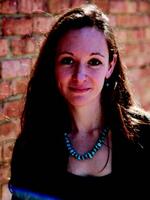 Lindsay J. Wright joins the Department of Music as an Assistant Professor beginning July 1, 2022. In 2021-22 will hold an ACLS Fellowship and will be appointed as an Associate Resarch Scholar. Wright received her PhD from the University of Chicago in 2018, following a MEd in Multicultural Education from Eastern University and a BA in African American studies and music from Wesleyan University. She has previously taught at the University of Chicago as a Postdoctoral Fellow in the Humanities, and has served as a public school teacher, youth orchestra conductor, and private instructor of string instruments since 2010.

In her research and teaching, Wright is interested in the interconnection of musical performance, pedagogical practices, and racialized systems of privilege in the United States. Her dissertation, the first music project to be awarded the National Academy of Education and Spencer Foundation’s dissertation fellowship, contended that “musical talent” is as heterogeneous, contingent, and politicized as the concept of music itself. Her current historical and ethnographic work builds upon this premise, including projects on the 19th century musician Thomas Blind Tom Wiggins; the theoretical and methodological significance of a violinist’s first note; and receptions of animal performers on televised talent shows.

During the 2021-22 year, Wright will focus on a book project supported by the American Council of Learned Societies. The Suzuki Industrial Complex: Race, Class, and Talent in American Classical Music investigates how the Suzuki Method has catered to fantasies of meritocracy while striving to dismantle the concept of innate talent upon which they depend. Wright’s second book project, The Talent Show: Race, Ability, and Performance on the American Stage, argues that evolving beliefs about innate musicality and the American Dream have been chronicled on stage through the talent show format—from 19th century amateur nights to contemporary talent competitions on reality TV and viral media. Together, Wright’s research centers processes of musical becoming, which are inextricable from the musical products musicology has long examined and crucial in addressing the inequities they display.