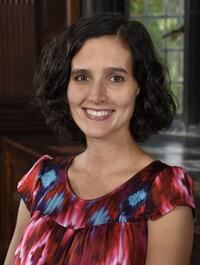 Claire Roosien is a cultural historian of modern Eurasia. At Yale, she teaches courses on modern Central Asia, Soviet and post-Soviet culture, and Russian empire and imperialism. Her book-in-progress, Socialism Mediated: Culture, Propaganda, and the Public in Early Soviet Uzbekistan, examines how Central Asian cultural producers, or “mediators,” imagined what she terms a “state public” through poetry, novels, film, newspapers, and other media produced in state-run mass institutions. Drawing on published and archival sources in several Eurasian languages, she focuses on the tensions between public legitimation and state control in propaganda and mass culture during the 1930s. From this project, her article on the Red Teahouse as an institution of the state public in Central Asia is forthcoming in Kritika. A second project, now in early stages of development, will examine Central Asian women’s performance as representatives on the domestic and global stage in the Soviet Union and post-Soviet Russia and Central Asia. Another project, based on archival fieldwork in Chuvashia and Tatarstan, examines the afterlives of Orthodox Christian missionary schools for non-Russian minorities in prerevolutionary and early Soviet Russia.

Before coming to Yale, she taught courses in Russian history, the Development of Western Civilization, and women’s and gender studies in the Department of History and Classics at Providence College.
‹ Morgan Ng up Braxton Deonte Shelley ›
Additional NavigationClose