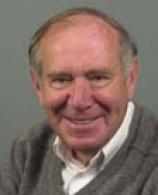 Karsten Harries, B.A. 1958 and Ph.D. 1962 Yale University, faculty member at Yale since 1961: Ever since your undergraduate days, studying drawing with the great Josef Albers, you have been embarked on a pathbreaking philosophical journey, grappling with art, architecture, and human existence, including what Heidegger termed “the being of beings.” Beginning with your dissertation on the problem of nihilism, you have focused on the ways in which objectifying science and technology confronts modern subjects with the issues of meaning and value. Your studies of important transitional philosophical figures, like Nicholas of Cusa, who stands between the middle ages and the Renaissance, and bridging artistic and architectural movements, as in The Bavarian Rococo Church: Between Faith and Aestheticism, improve our grasp of historical moments when the modern problematic was coming into view in philosophy, architecture, and art.

Author of more than two hundred scholarly articles and many important books, you have plumbed the deepest issues of aesthetics and metaphysics. You first made your mark in philosophical aesthetics in The Meaning of Modern Art, published in 1968. Your book The Ethical Function of Architecture, published in 1997, won the American Institute of Architects Annual International Architecture Book Award for Criticism. Your widespread influence has manifested itself in two Festschriften. One, Himmel und Erde (Heaven and Earth), was published by the Architecture faculty at Brandenburgische Technische Universität in Cottbus, Germany. The second, Ethics in Architecture, was published in the International Journal of Architectural Theory.

Your work in metaphysics, especially on Heidegger on the problem of being, has sought to illuminate the distinctive philosophical problems besetting modernity, including the issue of nihilism, which has concerned you from the beginning. This has also informed your work in the philosophy of art, both on Heidegger’s aesthetics (in Art Matters: A Critical Commentary on Heidegger’s “The Origin of the Work of Art”) and on architecture, where you have urged a “post-Copernican geocentrism.” You are a recognized boundary crosser whose intellectual presence  has helped shape not only philosophy, but also the humanities at Yale more generally, including in the School of Art and the School of Architecture, where you delivered the David W. Roth and Robert H. Symonds Memorial Lecture in 2017.

You have been a legendary teacher at Yale. The Yale College Class of 1963 gave you its award for “Outstanding Teaching and Mentoring Remembered With Gratitude Over Half a Century” at its fiftieth reunion. A supervisor of more than sixty dissertations, you have been famous for helping students find their own philosophical voices and for producing students who are not disciples. Finally, you have given invaluable service to Yale, as the Philosophy department’s chair and director of graduate studies for many years, and on many important University committees. As you retire after fifty-six years of service on this faculty, Yale proudly and gratefully salutes its own Yale son with a loud “Bow Wow.”