Professor Adjunct of English and Editor of The Yale Review 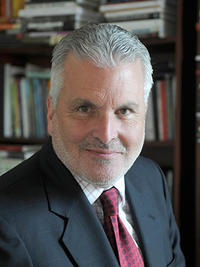 Sandy McClatchy, B.A. Georgetown University, Ph.D. Yale University, editor of The Yale Review and faculty member at Yale since 1991: You are one of the foremost men of letters of your generation. Your eight collections of poems, including the Pulitzer Prize shortlisted Hazmat, have been widely acclaimed for their formal skill and technical mastery, but book by book they show not only fluency, wit, and suave verbal magicianship, but also increasing depth of subject matter, penetration, and intensity of feeling.

You are always a poet first, but your poetic achievement is only the start of what has distinguished your career. In prizewinning literary essays, critical writing, and book reviews by the score, and in your extensive editions and anthologies as well as selections for archival recordings, you have become the trusted voice of the American literary establishment, the indispensable moving spirit of our general literary life. As if that were not enough, an opera lover since childhood, you have also had a prominent career as a librettist. Called by The New York Times, “the dean of American opera librettists,” you have had your work performed at the Metropolitan Opera, Covent Garden, La Scala, the San Francisco Opera, and other leading opera houses. Your singing translation of The Magic Flute for the Metropolitan Opera, which was broadcast live to movie theaters around the world, aired on Great Performances and is regularly performed worldwide.

Not every man of letters has administrative gifts, but yours, combined with your literary distinction and your cosmopolitan ways, have made you the most called-on and eloquent moderator, commentator, and introducer of your time. Countless readings, performances, and literary events at Yale and everywhere beyond have depended on you and benefited from your fluency and charm. A chancellor of the Academy of American Poets, a member of its board of directors, and a former president of the prestigious American Academy of Arts and Letters, you have been called on to organize, lead, and speak for your fellow artists time and again.

At Yale, in addition to teaching the courses “Writing of Verse,” “Literary Translation,” and “The Opera Libretto,” you chaired the English Department writing program for several decades, and again and again were the person who brought the wider world of letters to campus. First, when you were living in Silliman College in the 1970s, running a literary salon there, and later as well, you invited every major living American literary personage of any distinction to Yale—and mostly because of you, they all came. As editor of The Yale Review, whose future you personally secured with endowments, you were able to draw on your incomparably large circle of literary friends to acquire and publish the most distinguished authors of our time, side by side with new voices. For more than twenty-five years, you placed your distinctive stamp on the magazine, making it one of the vibrant journals of its time.

Any one of these achievements would have earned you the admiration and gratitude of your colleagues and your university, but together they assemble a breathtaking array of accomplishment. For your distinction as a man of letters, for bringing the winds of the literary world to Yale for more than four decades, and for making Yale very much the richer for your teaching and your influence, the members of this faculty offer you grateful thanks.