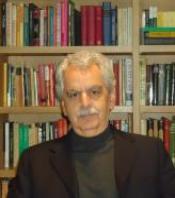 Adel Allouche, Licence des lettres en Philosophie and Certificat d’aptitude à la Recherche en Philosophie University of Tunis, M.A. and Ph.D. University of Utah, faculty member at Yale since 1999, after teaching at the University of Pennsylvania, Dartmouth, and Villanova, and serving as Middle East Bibliographer at the University of Pennsylvania: You are a scholar of Islamic and Middle East history and religion and a masterful paleographer, as at home with medieval Arabic manuscripts as with Ottoman Turkish and Savafid Persian documents. Your great command of theological texts is matched only by your knowledge of Islamic historical sources. Your first book, The Origins and Development of the Ottoman-Safavid Conflict, was a pioneering study of Ottoman-Safavid relations in the sixteenth century. It remains the standard study on the subject. The impressive breadth and depth of your work are evident in your second book, Mamluk Economics: A Study and Translation of al-Maqrīzī’s Ighāthah, where you rendered an exemplary translation of an important work of Ahmad ibn ‘Alī al-Maqrīzī, the celebrated fifteenth-century historian of Egypt. In your insightful commentary, you highlight the relationship between the flooding of the Nile River and recurrences of famine in Egyptian history.

Your books are hardly your only scholarship: in articles and encyclopedia entries you have covered a range of topics related to Ottoman and Egyptian premodern history. Your journal article on the famous Tunisian traveler Ibn Bat.t.ūt.ah and his 1326 journey through Syria and Arabia remains a pathbreaking inquiry of exceptional discernment. An inveterate scholar and researcher, you are now engaged in two groundbreaking studies on the early Islamic proto-dynastic rule in the Arabian Peninsula and on the Sunni-Shi’i Persian polemics in the sixteenth century.

Your field is recondite. But in every way your amicable and approachable manner have made you not only a helpful resource for faculty colleagues and a valuable and generous mentor to graduate students, but also a kind adviser to undergraduate advisees in the History department and at Pierson, who have also benefited from your wisdom and your deep knowledge of current affairs in the Middle East and North Africa. A colleague says of you, “Adel Allouche is a scholar in the most authentic sense: enthusiastic, critical, and modest.”

As you retire, Yale feels lucky and grateful that you came here and wishes you many more years of happiness and success in your scholarly endeavors.