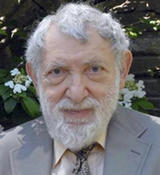 John Hollander, B.A. Columbia University, Junior Fellow Harvard University, Ph.D. Indiana University, junior faculty at Yale between 1959-1966 and then, after an absence, Professor beginning in 1977: If there ever was anyone who merited the word “prodigious” it is you. In our current age few have possessed the gifts to be both academic and poet, but you are a modern exception. Renaissance scholar whose seven wide-ranging books of criticism have made you universally admired, your work in this area alone would have been sufficient to bring you high honor. But surpassing even this is your stature as a poet. Starting with your first volume, chosen by W.H. Auden in 1958 for the Yale Younger Poets Award, you have earned recognition as one of the most admired poets of your day, winning the Bollingen and Levinson Prizes, a seat as a Chancellor of the Academy of American Poets, a MacArthur Fellowship, and the regard of a large and distinguished audience. Polymath who has written operatic and lyric works with the likes of Milton Babbitt, superb editor of countless books, including the Library of American’s two volume anthology of Nineteenth Century American Poetry, you have displayed amazing range, also writing for children and books of light verse, and composing Rhyme’s Reason, a charming text on the technical aspects of verse that continues to be a useful and popular academic best seller year after year.

At Yale you have taught a long line of students who are filling chairs in English departments around the country as well as publishing volumes of distinguished verse. Learned in languages, erudite in philosophy, knowledgeable about music, art, and the history of art, you could likely profess any of these subjects—and indeed, when you teach, in the classroom, or at the dinner table, you do. In the nation you are considered among the literary elite. In the department you have become, as Auden said of Freud, a “whole climate of opinion,” never compromising your rigorous standards and cutting an imposing figure your students, and even your faculty friends, regard with awe. As you retire now to continue writing, your Yale colleagues salute you as poet, critic, and teacher and praise you as one who has had, to use your own words, both “vision and resonance.”