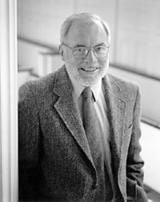 James Dittes, B.A. Oberlin College, B.D. Yale Divinity School, Ph.D. Yale University, faculty member at Yale since 1955: An eminent scholar of the psychology of religion and of pastoral theology, a stalwart citizen of both the Divinity School and the Religious Studies department, you have always sought ways to harmonize theory and practice, and to improve upon the ways in which we understand ourselves and think and act in our relations with others. Your books have made a difference in the lives of many, and have influenced the way in which professionals and institutions conduct themselves. Among these, The Church in the Way, Minister on the Spot, Bias and the Pious, and Driven by Hope stand out for their impact and their longevity. Your leadership in the larger scholarly community has been exemplary: among many other accomplishments you have been president of the Society for the Scientific Study of Religion and founder and first editor of the Journal for the Scientific Study of Religion.

You were here when the Religious Studies department was created, and are now the last of those pioneers to retire. Your contribution to that department is unparalleled. Each and every student who has ever earned a PhD in Religious Studies at Yale has come to know you in some way, for you were always very directly involved in the life of that department. You served a long term as chair from 1975 to 1982, and were Director of Graduate Studies so many times between 1969 and 2001 that even you lost count of how many years you put in at that post. Whether you were teaching at the Divinity School or in Yale College, your courses always drew an appreciative audience, and sometimes a very large one. Scholar, teacher, mentor, psychologist, administrator: you have been all these with grace to spare. Your colleagues at salute you as you retire, and bow in tribute to your embodiment of Yale’s greater virtues.