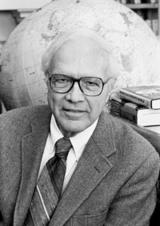 Brad Westerfield, B.A., Yale University, M.A., Ph.D. Harvard University, faculty member at Yale since 1957, you are known both for your formidable knowledge about the politics of foreign policy making and for your exemplary teaching of undergraduates and graduates. Your books Foreign Policy and Party Politics: Pearl Harbor to Korea and The Instruments of American Foreign Policy established you early on as a leading authority on American foreign policy during the cold war. In recent decades you have become the unrivaled expert on U.S. intelligence agencies, and your 1995 book Inside the CIA, an edited collection of declassified articles from the Agency’s internal journal between 1955 and 1992, brilliantly illuminates the workings of the agency during that time.

Lifelong resident of New Haven (save for a short temporary residency in the vicinity of Harvard Square and an even shorter one in Chicago), son of a beloved Yale professor, profound believer in the benefits of a Yale education, you have taught by one count over ten thousand undergraduates and become a beloved Yale professor yourself. Member of so many committees that the very mention of your presence on them seems an act of supererogation, recipient of the Burnes/Sewall prize for undergraduate teaching in 1993, and always willing participant in and watchful observer over the affairs of Yale College, on the occasion of your retirement the Yale faculty turns to you in your accustomed seat in the faculty room of Connecticut Hall, and gratefully tips its mortarboard.