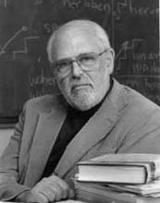 Kai Erikson, B.A. Reed College, Ph.D. The University of Chicago, faculty member at Yale since 1966: your eloquent voice in defense of human communities has changed our understanding of the way disasters affect the minds and hearts of human beings everywhere. From the 17th century landscapes of New England to the 20th century landscapes of Appalachia, from the fragile neighborhoods around nuclear power stations to the broken neighborhoods of Bosnia, your searching studies of the way human beings react to trauma and catastrophe, or the threat of these, has given all of us a better understanding of the vulnerability and fragility of the ties that bind. Always equally as compelling as what you say is how you say it: your masterful prose has caused many a reviewer to pause and remark with admiration at the unforced persuasion and beauty of your style. As Robert Lifton wrote in reviewing your 1994 book, A New Species of Trouble, “Erikson speaks softly and powerfully…No other social scientist—indeed no other American writer—can equal his…capacity to move from the eloquent particular to the wise generalization.”

As influential as your work has been as a scholar, it has not overshadowed the variety of ways you have used your talents. Mentor to generations of undergraduate and graduate students, Chair of the Department of Sociology and of the American Studies Program, editor for a decade of The Yale Review, and President in turn of the American Sociological Association and of the Society for the Study of Social Problems, people have always counted on you to participate in and build communities, and you have not disappointed them. In the councils of the University, nothing could have tested your talents more than your years as the highly-regarded Master of Trumbull College and Chair of the Council of Masters, when President Brewster called on your voice to help calm and support the University in edgy times. One of the voices of reason and honor at that time, and an articulate voice of sweet reasonableness at all times, as you retire the community which make up this Yale faculty honors your scholarship and service and offers you its united thanks.