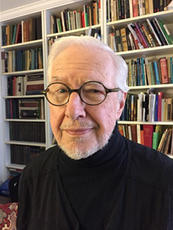 Michael Holquist, B.A. University of Illinois, Ph.D. Yale University, faculty member at Yale between 1968-1975 and again since 1986: You are an important comparative literature scholar and the world’s most important explicator of the works of Michael Bakhtin.  You have been a primary mover in bringing this formidable 20th century Russian thinker’s work to a worldwide public, the person responsible for the translation of four volumes of Bakhtin’s works and the co-author of the biography and critical study of the that has been translated into Spanish, Italian, Japanese and Chinese. You are also one of the preeminent scholars and interpreters of the works of Dostoevsky, and your teaching of Russian literature and culture, as well as of literary theory, has inspired several generations of students, many of whom now continue your teaching in universities and colleges throughout the country.

You were at Yale in the beginning days of the Literature Major, and were, with Paul deMan and Hillis Miller, one of the founders of Lit X, a course that shaped a galvanizing and controversial new approach to studying literature. When you returned to Yale after chairing the Slavic departments at Texas and Indiana, your leadership of Comp. Lit. encouraged students to explore literature outside of the Western Canon and led to the development of a course in World Literature. In fact you always have been a pioneering internationalist, building bridges to Russian scholars during and after the Cold War, and creating openings between Yale and universities in the Republic of China. Your personal qualities—you are a gregarious oenophile— have no doubt helped with your gift of making true friends around the world, often to Yale’s benefit. In 2004 your excellence as a devoted teacher was recognized when you received Yale’s undergraduate Byrnes/Sewall Teaching Prize at Class Day. And in the same year, your colleagues honored you by electing you to take up the presidency, in two years time, of the Modern Language Association.  As you retire, Yale thanks you for all of your distinguished contributions, and will watch—to use Bakhtin’s term—your “unfinalizability,” as you assume a national leadership role in an organization devoted to fostering the humanities.