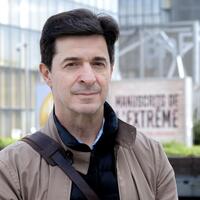 Jesús Velasco, Professor of Spanish and Portuguese, studies Medieval and Early Modern legal cultures across the Mediterranean Basin and Europe within and outside the legal professions from the perspective of contemporary critical thought. He is the author of Dead Voice: Law, Philosophy, and Fiction in the Iberian Middle Ages, Plebeyos Márgenes: Ficción, Industria del Derecho y Ciencia Literaria, and Order and Chivalry: Knighthood and Citizenship in Late Medieval Castile. His current project is entitled Science de l’âme et corps du droit, and he is finishing his project on Microliteratures: The Margins of the Law. He has published articles in MLN, La Corónica, Studi Ispanici, and many others. He has taught courses and seminars in Latin American and Iberian cultures, along with comparative literature, law, theory, and public intellectualism, among others. Velasco has taught at the École Normale Supérieure (Fontenay), University of Salamanca (Spain), UC Berkeley, and Columbia University, where he was part of the Department of Latin American and Iberian Cultures, the Institute for Comparative Literature and Society, and the Columbia Center for Contemporary Critical Thought of the Law School. He has held visiting positions at Emory, École Normale Supérieure de Lyon, Roma Tre, École des Hautes Études en Sciences Sociales, and Paris III, among others. At Columbia, he has served as Director of Undergraduate Studies, Director of Graduate Studies, Chair of the Department of Latin American and Iberian Cultures, and Director of Undergraduate Studies at the Institute for Comparative Literature and Society.