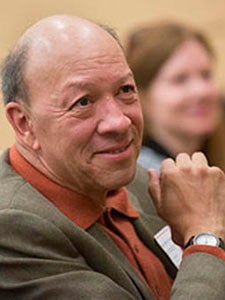 Robert Stepto, B.A. Trinity College, Ph.D. Stanford University, faculty member at Yale since 1974: Your many works in African American literature and culture endure as essential reading. You have mapped the coordinates for a generation of students and more in your field in works such as From Behind the Veil: A Study of Afro-American Narrative; Chant of Saints: A Gathering of Afro-American Literature, Art, and Scholarship; Afro-American Literature: The Reconstruction of Instruction; Blue as the Lake:A Personal Geography; and A Home Elsewhere: Reading African American Classics in the Age of Obama.

From Behind the Veil, elegantly framed as the “call” of nineteenth-century writers and the “response” of their twentieth-century successors, brilliantly charted the canonical African American mythos of freedom quests and literacy as central to African American thought, from the slave narratives, to Washington and Du Bois, to Johnson, Wright, and Ellison. That work gave name to a distinct African American literary tradition that continues to frame our investigations, and the book’s extraordinary shelf life speaks to the power of your original formulations. Your lyrical memoir, Blue as the Lake, established you as a beautiful prose stylist in your own right, and vividly captured the “blues ride” rhythms of 1940s and ’50s black enclaves, from Lake Michigan, to Martha’s Vineyard, to the Chicago neighborhoods where you spent your youth. This musical rendering of your and your ancestors’ personal geography was an American history lesson in itself, putting before us in detail a world of black sociality whose roots stretch back to slavery and fugitivity, to be sure, but whose quiet is largely lost to our national spectacles of racial injustice and violence. In A Home Elsewhere you mobilized with ingenuity and poetry your deep understanding of the African American narrative tradition to position Barack Obama for a generation who did not yet know quite where to place this figure or how to understand him.

During your forty-five years at Yale, you have called three departments your home: English, African American Studies, and American Studies. You have been indispensable to all three, serving in key leadership roles in each unit, and in Theater Studies, too, with devotion and care. You have been central to the development of graduate studies in African American Studies at Yale, serving as the first DGS for the M.A. program when it was launched in 1978, and contributing to the design of the department’s field-leading Ph.D. program, which accepted its first cohort in 1993.

Your signature courses at Yale—Modern Black Poetry, Autobiography in America, Ralph Ellison in Context, and American Artists and the African American Book—have shaped generations of Yale undergraduates, M.A., and Ph.D. students. Many of your colleagues also count themselves among your mentees (and not only the younger ones), for your wise, always calm, but principled and exacting presence in matters both intellectual and institutional. Although you are always humble, quiet, and loath to take the spotlight, we insist on giving it to you now as we offer you our heartfelt thanks for your extraordinary career as scholar, memoirist, mentor, and institution-builder.