Ramalingam: Teaching the Art of Discovery 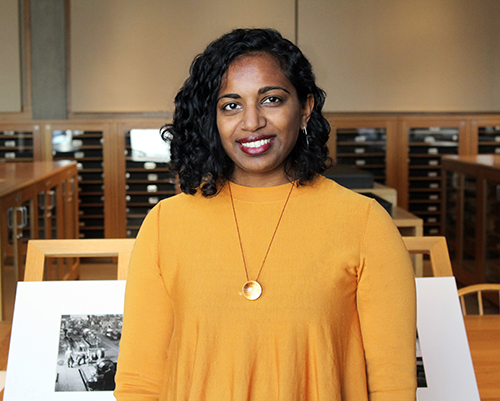 According to Chitra Ramalingam, the assistant curator of photography at the Yale Center for British Art (YCBA) who is also a lecturer in History, there is no better place to teach a course on the interdisciplinary history of photography than at Yale. This is largely because, as an old and storied research institution, Yale is a repository of photographs used across the disciplines over nearly two centuries of the medium’s existence. In 2010, four years before Ramalingam arrived on campus, the Andrew W. Mellon Foundation funded a cross-departmental team to perform a survey attempting to determine the total number and character of photographs housed in Yale’s departments and collections. The answer they found was an awe-inspiring 3.8 million. For the past three years, through her work at the YCBA and in the classroom, Ramalingam has taken it upon herself to locate and study as many of these photographs as she can. To her delight, she quickly discovered that many of Yale’s photographs can be found in unexpected places.

Ramalingam is fascinated by the question of where photographs belong, which stems from an even larger question: What is photography? For much of the past century, photography has largely been classified as a form of art, like painting or sculpture. However, as Ramalingam points out, most of the photographs being made today have very little to do with art. Many of the photographs that the average person encounters have record-keeping and knowledge-making purposes: those in a family album are meant to preserve memories, those in a newspaper are meant to record events, and those in a court room or a laboratory are meant to document evidence. So how should photography be classified? Is it an art or a science?

Ramalingam’s interest in this question may result from her own unusual path to expertise in a field commonly associated with art history. Before she had any involvement in history, visual culture, or art, Ramalingam was training to be a scientist. After completing her undergraduate degree, from Harvard, in Physics and Philosophy, she began pursuing an M.Phil at Cambridge in the History and Philosophy of Science department. It was just a one year program, but that short time made a big impact on Ramalingam. “I went to Cambridge as someone who thought I ultimately wanted to be a physicist or maybe a philosopher of science,” she recounted. “While I was there, I became really intrigued by the history side of things in the department. I basically switched allegiances.” Ramalingam earned her Ph.D in history of science at Harvard, focusing on the visual culture of physics, before returning to Cambridge as a research fellow. It was during this time that she deepened her own study of history of photography, and taught her first course on photography in Cambridge’s History of Art department. With a background in physics and history of science, it is no wonder Ramalingam sought to view photography through a scientific lens.

The answer to Ramalingam’s primary question is complicated and dates back to the invention of photography in the 1820s and ’30s. “Photography was invented in a period when it was still new to talk about Art with a capital A and Science with a capital S, so it wasn’t at all clear what kind of a practice it was,” Ramalingam explained in an interview in her office at the YCBA, during which she offered a capsule lesson on the history of the form. The camera obscura, a predecessor of the modern camera which could project an image but not record it, had long been used by artists as a drawing aid. Perhaps the most famous father of photography, Louis Daguerre, was a painter and set designer from France whose training as an artist likely influenced his invention. However, during roughly the same period, separated only by the English Channel, a British gentleman named William Henry Fox Talbot was developing a similar technique with a very different focus.

“Pretty much all the early photographic pioneers of Britain were, we can call them, ‘gentlemen of science,’” Ramalingam said. “They were these gentlemen of means who had learned chemistry and optics, and then were doing research and tinkering in their spare time.” She added that Talbot was, like many members of the British gentry, an enthusiastic botanist, and that many of his early photography experiments were images of plants and leaves. “Talbot was trained in visual judgment through botanical handbooks and field guides,” she explained. “He knew how to observe and document plants by paying attention to particular details like veins or meticulously counting intricate features. Often in his plant photographs he’s arranging them so that you can take in precisely the details that a botanist would be interested in. But in other photographs of different subject matter he expresses the identical concern with visually discerning and counting details.” That is precisely why traditional formalist analytical tools like composition and framing may be limiting when examining many of Talbot’s photographs. These photographs were meant as much to convey knowledge as to be aesthetically pleasing—which, to Ramalingam, changes the way they should be analyzed. To really understand a photograph, it is vital to examine how it was made, who it was made for, and how it was actually used. 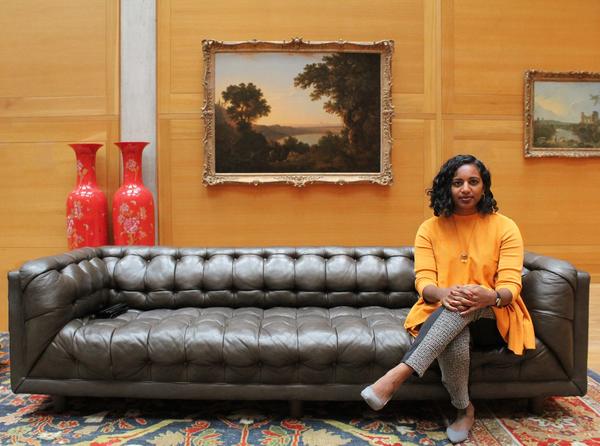 Ramalingam in the library court of the YCBA. Photograph by Leah Salovey for the FAS Dean’s Office.

This complex understanding of photography is the premise for Ramalingam’s course, “Photography and the Sciences.” In her class, a graduate seminar limited to fifteen students, Ramalingam asks each student to find, in one of Yale’s collections, a photograph about which no secondary literature exists, and to analyze it. During the three semesters that she has taught this class, Ramalingam has guided her students to images located even in the dustiest corners of the university. Student projects and collections visits in past years have included everything from images of 19th missionary expeditions located in the divinity library, to photographs of chimpanzees used for experiments during the 1930s at the medical school, to a glass-plate record of the sky over the course of a century that once was located in the basement of the now-demolished J.W. Gibbs Laboratories. Together, the members of the class examine how and why these images were made, how they were disseminated, and how they influenced or were shaped by political, religious, and scientific movements.

Ramalingam couldn’t imagine teaching a course like this anywhere but Yale. “Our collections are so rich and so deep because this has been a center of learning for so long,” she reflected. “I can’t even predict the objects that the students in my class will end up finding and writing about when they explore Yale as a photographic archive on its own terms.” For her class and in her own projects, she takes advantage of resources all around campus: connecting her students to expert librarians, curators, and archivists across Yale’s libraries, museums, and collections; delving deep into the recesses of the Orbis library catalog; collaborating with photography experts in American Studies, History of Art, and Women’s, Gender, and Sexuality Studies; and working across the disciplines with scientists at the Institute for the Preservation of Cultural Heritage on West Campus.

And if Ramalingam’s work seems ambitious, her aspirations are even more so. She is excited by her role in building a world-class photography collection at the Yale Center for British Art, and is working on an exhibition project focused on fading as a scientific, technical, and aesthetic aspect of 19th century photography, as well as a book project about laboratories as photographic archives. Looking farther into the future, Ramalingam has big dreams for her course. “Currently I teach this class as a seminar so there is a maximum of fifteen students a semester,” she says. “This is the third time I’m teaching it, so at the end of the semester it’ll still only be forty-five students and forty-five projects. But I envision teaching this class for years and, through my students’ discoveries, building up this rich sense of what Yale has that’s hidden.”

And with 3.8 million discoveries to make, Ramalingam and her students are ready for the challenge.